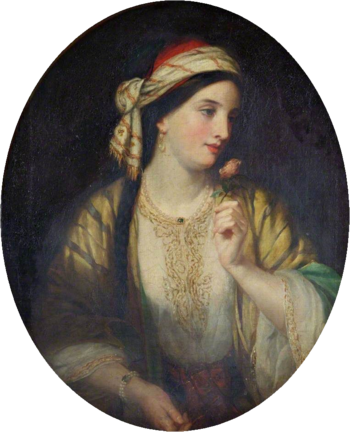 A Circassian Girl by Henry Hall Pickersgill (c.1843-1850)
The Circassians are poor, and their daughters are beautiful, and indeed it is in them they chiefly trade. They furnish with those beauties the seraglio of the Turkish Sultan, of the Persian Sophy, and of all of those who are wealthy enough to purchase and maintain such precious merchandise. These maidens are very honorably and virtuously instructed how to fondle and caress men; are taught dances of a very polite and effeminate kind; and how to heighten by the most voluptuous artifices the pleasures of their disdainful masters for whom they are designed.
— Voltaire, Letters on the English (1734)
Advertisement:

The term Circassian Beauty refers to the romanticized portrayal of women from The Caucasus: breathtakingly beautiful and feminine, slender-waisted and pale-skinned, with rosy cheeks and lustrous, big blue eyes. She embodies ideals of womanly purity and virtue, but also sexuality; she is alluringly exotic, yet familiar. A mainstay of Orientalism, the Circassian Beauty not only signified an idealized representation of womanhood in the European imagination, but — more significantly — a device through which ideas about the Near East were projected.

In western literature and art, the Circassian Beauty will typically be a nubile slave girl on the auction block, ultimately destined for the sultan's harem; she will likely be portrayed as the most beautiful girl in the palace, who nevertheless dreams of someday escaping her Gilded Cage. Some theorists have suggested

that the image of the enslaved Circassian played into transgressive fantasies of a white-passing woman as a sexual object, subjected to the whims of her master. Her predicament would simultaneously disgust, horrify, fascinate and titillate the audience, who could safely experience the thrill of the situation by projecting onto an eroticized Other.

The trope takes a somewhat different (though no less orientalist) form in Russian Literature, where the Caucasus is more likely to feature as a setting. In the romantic imagination, the Caucasus was an untamed land on the edge of civilization, where men could find adventure and freedom (think of it as equivalent to the American Wild West); it was a perilously enticing frontier, home to exotic customs, fierce mountain clans, marauding raiders, and of course, bewitchingly beautiful women. In these stories, the Circassian Beauty appears as a member of a rugged yet noble mountaineer clan, and often the protagonist's ill-fated Love Interest.

The allure of the Circassian Beauty reached far beyond popular literature, however; it too exerted its influence on the Enlightenment-era "science" of racial classification. Johann Friedrich Blumenbach, one of the most influential taxonomists of the period, first used "Caucasian" to describe the "white" variety of man. Blumenbach declared the peoples of the Caucasus (specifically Georgians) as the "most beautiful of mankind" and theorized they were the most primordial, uncorrupted form of the human race, from which the lesser, more degenerate races derived.

In the latter half of the nineteenth century, so-called "Circassian Beauties" would become a staple of sideshow attractions across America - local performers billed as Sex Slaves freed from the eastern markets and the purest form of the white race, identifiable by their "exotic" Afro-like hairstyles which in truth bore little resemblance to anything out of the Caucasus. In a cruel twist of irony, this coincided with the very real oppression of actual Circassians, who were massacred and forcibly exiled by Imperial Russia in a genocide beginning in 1864.note Many Circassians thus ended up in the Arab World, and today live as semi-Arabized minorities in various countries. They are particularly prominent in Jordan, where their women married into the upper classes and their men won places in the government and military through loyal service to the House of Hashem.

Beyond these falsehoods, fantasies, and fabrications, there is a degree of truth behind the Circassian mystique. Caucasians were targeted as a prized commodity in the eastern slave trade, where they were sold into the harems of Sultans, Shahs, and other wealthy men. Many notable consorts of Ottoman Sultans had their roots in the Caucasus, including several valide sultans (queen mothers).

Today, the Circassian Beauty is largely a discredited, Forgotten Trope — the product of bygone orientalist fantasies and refuted scientific theories. Nevertheless, the legacy of the trope persists through racial terminology, which despite discreditation by modern science, has not faded from popular usage.

Note that in context of the trope, "Circassian" may refer either to the people also known as the Adyghe

, or more broadly, to indigenous Caucasian highlanders. This latter category includes the Adyghe as well as peoples such as Georgians, Chechens, Ossets, and Avars. In English, "Circassian" was originally a catch-all term for "mountaineer" or "highlander" (equivalent to Russian gorets), a definition that did not begin to narrow until around the mid-nineteenth century.

Additionally, although the trope is almost Always Female, Circassian men have also been subject to the stereotype.