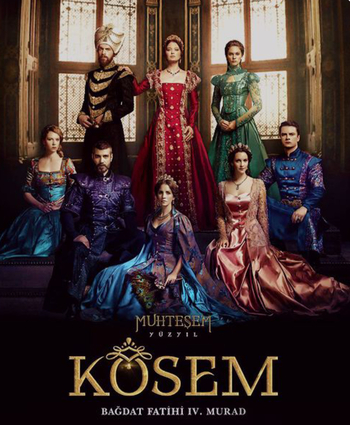 From top to bottom clockwise: Murad, Kosem, Farya, Bayezid, Ayse, Gevherhan, Silhadar, Atike
"I have never been afraid of anyone -- and I never will be."
Advertisement:

Muhteşem Yüzyıl Kösem is a Turkish historical drama and a follow-up to the international hit Muhteşem Yüzyıl (Magnificent Century). Premiering in 2015 on Star TV, it details the life of Mahpeyker Kösem Sultan, one of the most powerful women in the history of the Ottoman Empire, charting her evolution from a concubine of Ahmed I to a formidable valide sultan.

The series begins in 1603; Ahmed is proclaimed Sultan following the death of his father, Mehmed III, but there is little jubilation as he takes the throne. At only thirteen years of age, Ahmed is a inexperienced leader and overwhelmed by his newfound position of power. Moreover, the fate of the dynasty lies in his hands: his only successor is his half-brother Mustafa, only a young boy, who has been unexpectedly spared from the tradition of fratricide. The viziers dread a Succession Crisis should the worst come to pass, while rival players await an opportunity to strike.

Unbeknownst to Ahmed, a coronation gift courtesy of his grandmother Safiye has arrived in Istanbul's harbor: Anastasia. A carefree merchant's daughter from island of Kefalonia, Anastasia was the subject of a local painter whose work fatefully found its way into the imperial treasury, where her radiance captivated the future sultan. Needless to say, the girl in the painting is none too pleased to be forcibly abducted as a surprise "gift" for a foreign monarch. Far from home in a strange land, she finds nothing but misery in the palace... save for the unexpected friendship she develops with none other than the young sultan himself.

The girl Anastasia grows into the woman Kösem Sultan, who would bear witness to momentous historical events and the reigns of six sultans. The first season, starring Beren Saat in the titular role, details Kösem's life as Ahmed's consort, as she rises to prominence and learns to navigate the Ottoman court. Season two features Nurgül Yeşilçay as an older Kösem, now valide sultan, and begins in 1632, as her son Murad breaks free from her regency to rule in his own right.

Despite initial buzz for the series and an impressive cast lineup, Magnificent Century: Kösem ultimately failed to achieve the popularity of its predecessor. Faced with low ratings and numerous shake-ups behind the scenes, the saga was forced to end after only two seasons.