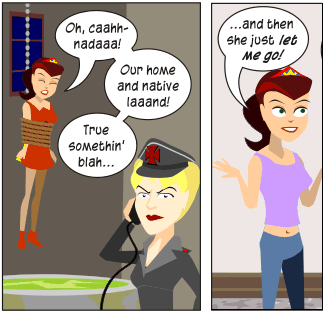 Hmm, I wonder why.

"Frail? You? Serra, you have no need of any escort to protect you. Even the most hardened criminal would flee in terror after five minutes in your company."
— Erk, Fire Emblem: The Blazing Blade
Advertisement:

The single most powerful deterrent to kidnapping in all fiction, (and certainly in the mundane category), is to be so annoying that the kidnapper requires an active force of will to keep their sanity. What makes them annoying isn't important. In truly bizarre cases, the kidnappers can be annoyed because their victim insists on being kind, upbeat, and forgiving even through torture. The point is, nobody wants to be around them and that ransom note looks increasingly unimportant as compared to the promise of not having to deal with the Anthropomorphic Personification of "damned pest" day in and day out.

This can lead to an especially awkward situation when it turns out that the extortee doesn't want the hostage back. Expect much comedy to abound in this scenario, in part because a sufficiently vicious kidnapper would not get in this situation in the first place. Foiled by niceness once again, it seems.

This trope is a fairly old one. O. Henry's famous example "The Ransom of Red Chief" executes this trope using a pair of kidnappers (and a particularly bratty kid as the "victim") back in 1910, and there are stories, jokes, and folk tales going back to the Middle Ages and beyond of someone who escapes damnation because the Devil Himself doesn't want to deal with her (and it was almost always a her, because the Middle Ages were like that).

It's fairly common for this trope to be invoked if the captive is particularly Genre Savvy or cunning. Subversions, aversions, and defiances of this Trope usually (although not universally) involve the kidnapper hitting a Rage Breaking Point and demonstrating how much of a bad idea this was, being unrelentingly evil in the face of said annoyance, or the hostage finding out the hard way that whatever is the final objective of the kidnapper they don't need to be alive (or at least conscious) for it to be achieved.

Compare Too Spicy for Yog-Sothoth, where the captive is intolerable even to the most hardened captor, Prefer Jail to the Protagonist, where the villain is forced to flee from the hero's presence even if it means being re-incarcerated, and Talking the Monster to Death, where the captive directly challenges the captor's beliefs and motivations. Contrast Poisonous Captive, who insidiously subverts and undermines the captors. If you pity the kidnappers because they're about to get their asses kicked by the kidnappee, then that's Mugging the Monster. Also compare Defiant Captive, who is more 'uncooperative' than simply 'annoying'. See also Sick Captive Scam, which is another trope that works better when the captors don't want any harm to come to the captive.

When Rolf tries to torture Ed, he ends up the one who's being tortured.

When Rolf tries to torture Ed, he ends up the one who's being tortured.