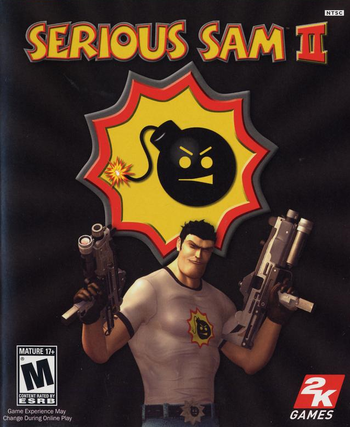 "You have exactly five seconds to explain what I'm doing here, and two seconds have passed."
Sam Stone
Advertisement:

Serious Sam II is a First-Person Shooter videogame created by Croteam in 2004 and published by 2K Games for PC and Xbox. It's the third installment in the Serious Sam series.

After the events of Serious Sam: The Second Encounter, Sam has been summoned by three individuals who introduce themselves as the "Sirian Great Council" (the calm and collected Jebediah, the snarky Rajiv, and their leader, Rolanda) who brief him about a medallion created to weaken Sam's long time Arch-Enemy Mental. Said artifact was broken into five pieces which were scattered across civilizations on five planets: the Simbas of M'Digbo, the Zixies of Magnor, the ChiChi of Chi-Fang, the Kleer of Planet Kleer and the Elvians of Ellenier. It's then up to Sam to retrieve and unify these pieces in order to put a definitive end to Mental and his army.

The game is a step back regarding the previous installments, scaling back the horde and secret count, the weaponry and even the enemy variety. It also features a cartoony, almost comical look, which contrasts heavily with the previous games's more... Ehm... Serious look. The weaponry has been overhauled, with a few returning weapons (both varieties of the Shotgun, the Grenade Launcher, the Rocket Launcher, the Serious Minigun, the Cannon, the Sniper Rifle and the Serious Bomb) joined by newer ones (a chainsaw gauntlet, a self-recharging blaster, a pair of Uzis and a bomb-carrying parrot). Vehicles are also introduced in the series, with Sam being able to use flying hovertanks, turrets and a spiked hamster ball. All in all, it's easy to say that II is the least "Serious" of Sam's games.

Unlike the other main entries, this game hasn't received either an HD or VR release, in part due to its Troubled Production and plenty of Executive Meddling from 2K which led to Croteam first disowning the game, and then excising it completely from the SS canon, though Croteam has been hinting either a proper remake (more in line with TFE and TSE) or remaster of the game for quite a long time.

On March 23, 2021, the game received an unannounced, surprise update

which allows Sam to sprint, Rocket Jump and dual-wield all of his weapons, added two new weapons called the "BeamGun" (the Ghost Buster from the original documents for TFE) and a Flamethrower, a Legion-esque system for single-player and coop sessions which allows Sam to face SS4-levels of enemies, 12 new, previously unreleased maps for multiplayer, and a radar, and plenty of bug fixes and improvements.

Followed chronologically by a prequel to TFE, Serious Sam 3: BFE.

"Maybe we've got to beat the game in Serious difficulty?"
"Yes, that must be it!"
"Aww... Damn! I could never do that."
"Oh man, it's not fair!"
"Err... I'm sorry gentlemen, I have beaten the game on Serious, but Mental didn't appear anyway."
"I've never seen a more stupid ending to a game..."