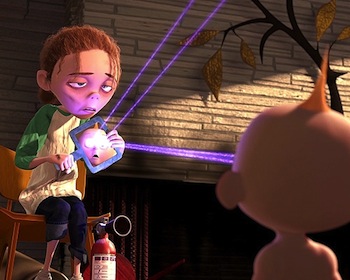 ...I think...I'm getting the hang of this...
"The baby was EXPLODING! You ever sat an exploding baby before, Mr. Dicker?!"
— Kari McKeen, Jack-Jack Attack
Advertisement:

One of the classic comedy plots, most often seen in cartoons. A babysitter is left in charge of an infant (who, despite being so young, turns out to be incredibly mobile). As soon as the infant's parents are off-stage, the babysitter begins a gauntlet of pain and anguish of which, somehow, the infant is the ultimate cause.

There are some common variations. The baby may wander away from the home, with the babysitter giving chase. In others, the baby itself turns the home into an obstacle course of doom using the furnishings, appliances, water pipes, electrical outlets, and pretty much everything else in the house. Or it is possible that the baby is unusual in some way, and thus is physically dangerous, and will inadvertently (or not so inadvertently) hurt the babysitter in the course of "playing". Regardless, in the end grievous bodily harm comes to the babysitter (and quite often the home itself is wrecked)... but the baby itself is safe and sound, and utterly unhurt.

When the parents — who frankly should be locked up for negligence — return home, they are either totally unaware that anything untoward has happened or chastise the babysitter for something trivial, like tracking mud on the carpet, not knowing that the sitter has suffered massive Amusing Injuries keeping their child safe.

A version of the story (below) goes right back to ancient Welsh folklore — making this trope Older Than Print.

Note that the "babysitter" need not be an actual babysitter, nor the "infant" an actual infant. This trope works any time a supposedly responsible individual is left in charge of an innocent and ends up paying for it physically.

Compare No Sympathy, Escort Mission (and Stealth Escort Mission when the babysitter must ensure their charge is unaware there was any danger in the first place), and Dreaded Kids' Party Entertainer Job. Can overlap with Baby Morph Episode if the baby used to be older.

The charge in question is usually a Babysitter's Nightmare. Babysitter from Hell is the inversion of this trope, but this trope sometimes comes into play as a karmic punishment. It also works the other way around. See also Babysitter Friendship, where the child the babysitter looks after is one of their best friends.

Eda and King have their hands full with a bat baby that eventually becomes a trio of fire-breathing bat babies.

Eda and King have their hands full with a bat baby that eventually becomes a trio of fire-breathing bat babies.