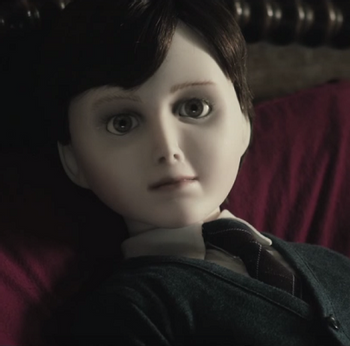 The Boy is a 2016 horror film starring Lauren Cohan. Cohan portrays Greta, an American woman on the run from a bad situation at home. She winds up in England and accepts a job as a nanny for an eccentric old couple, the Heelshires. But things are apparently very wrong in the Heelshire mansion, for it turns out that Greta won't actually be taking care of a real boy, but rather a porcelain doll who represents Brahms, the Heelshires' deceased son. Rather than reject the job, Greta is grateful for the safe haven the mansion provides, and she enjoys the flirtations of Malcolm, who delivers the mansion's groceries. Unfortunately, she forgets all about Brahms very quickly, and while he might not be in the world of the living anymore, the Heelshires' son will not be denied affection...

Hate Sink: Cole is just an abusive scum to his girlfriend