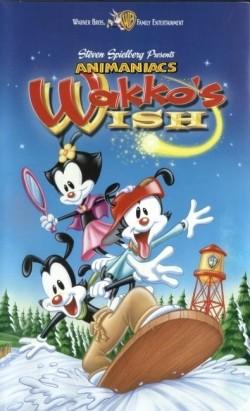 "One wish? Who could ask for anything more?"
— King Salazar

In 1999, Animaniacs was pretty much on its last leg as Kids' WB!'s signature show — many of its writers and voice actors had moved on to Histeria! and Pokémon was fast becoming the most successful show of the block — but at the end of the year, the series was given a Grand Finale in the form of the feature-length Direct to Video movie Wakko's Wish.

In the film's continuity, the majority of the regular cast of Animaniacs — and a few extras here and there — are living happily in Acme Falls, a nice town in the peaceful kingdom of Warnerstock that is ruled by Sir William the Good. When King William passes away, King Salazar the Pushy of the neighboring kingdom Ticktockia takes over Warnerstock and sends everyone into misery thanks to overtaxing. The Warners — Yakko, Wakko, and Dot — are a trio of orphans who are suffering more than any other Acme Falls resident, especially Dot (who is in need of a vital operation).

One cold winter night, Wakko wishes upon a star — and happens to choose the one wishing star in the sky, which then falls into the mountains; the first person to touch it gets exactly one wish. The Warner siblings, eager to make their dreams come true, begin their quest to get to the wishing star so Wakko can make his wish — but the rest of the citizens of Acme Falls are after it as well, and so is King Salazar. Who will get to the wishing star first and make their wish? And will any of them find lasting happiness with a tyrant like King Salazar doing his best to take it all away?

The Warner siblings give King Salazar a warning about making a careless wish on the Wishing Star, mostly as an excuse to subject him to their usual antics.

The Warner siblings give King Salazar a warning about making a careless wish on the Wishing Star, mostly as an excuse to subject him to their usual antics.