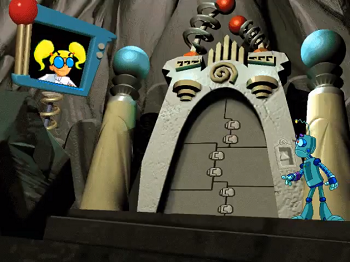 "You'll never get past the game of Simon I locked this door with!"
A game in the Jump Start series of Edutainment Games. Originally released in 1996, this game has never been remade, though it has been given some minor alterations over the years. By the time of its last re-release in 2003, it was the oldest product still in the JumpStart line. It was discontinued only when Knowledge Adventure phased out the traditional JumpStart line in favor of a massively multiplayer online game located at jumpstart.com.
Advertisement:

Professor Spark lives in a Raygun Gothic Elaborate Underground Base built inside the mountain of the subtitle. His daughter Polly is a Spoiled Brat who may be best described as a Diabolical Mastermind version of Veruca Salt. One day, while the Professor is out, Polly fails a history quiz at school and decides the solution is to use Daddy's Time Machine to alter history, thus making her absurd quiz answers correct. With the help of Botley, a Robot Buddy who serves as Polly's Badly Battered Babysitter, you, the player, have to thwart Polly and Set Right What Once Went Wrong before the Delayed Ripple Effect will (supposedly) set in.

There are twenty-five robots Polly has sent back in time, one for each question on her botched history quiz. For each robot, you have to complete a Fetch Quest, collecting Plot Coupons from the various science-fiction-themed Mini Games inside Mystery Mountain. Once you have all four items and enough points, you're permitted to enter the time machine room. There, you're given a quiz which links the items, in a six degrees sort of way, to the place in history where the robot was sent. You then bring that robot back to the present and begin work on the next one, until all of them have been rescued. You can see a Walkthrough starting here

The game was released as Flygande Start 3:e Klass ("Flying Start 3rd Class") in Sweden, as Alkupolku Kolmas Luokka - Vaarojen Vuori ("Starting Path Third Class - Mountain of Dangers") in Finland, and as La Montaña Misteriosa ("The Mysterious Mountain") in Spain. These appear to be the only releases it received outside of North America.

Polly demands that you, the player, solve another puzzle.

Example of:
Moving the Goalposts

Polly demands that you, the player, solve another puzzle.