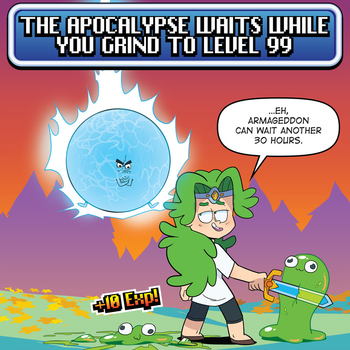 "Armageddon tired of waiting!"
"There is apparently no crisis so imminent that will deter you from contemplating idiotic and frivolous actions."
— Homestuck
Advertisement:

A near-ubiquitous video game trope: no matter how urgent the hero's quest is said to be, he can almost always take as much time as desired before confronting the Big Bad (or otherwise advancing to the next plot point) to finish sidequests, collect items, repeatedly stay overnight at the Trauma Inn, unlock the hidden superpowers of his teammates (including any useless ones), waste time on minigames, or even stand around doing nothing.

This is because in the vast majority of games, time only passes meaningfully in the gameworld as the player advances through the story. However, in order to progress the story or quest at hand, the player has to trigger an event by going somewhere or doing something specific, and until they do, time will effectively stand still.

On a smaller scale, even the most pressing, immediate tasks, such as, say, rescuing a fellow character who is dangling off a ledge at five hundred feet in the air, can be done at one's leisure, provided there isn't a number countdown ticking away on screen. Of course, the accompanying cutscene might still depict you arriving just barely in time (or only moments too late), and you can expect NPCs to nag you constantly to establish a false sense of urgency.

In effect, nothing happens unless the player causes it to happen. This is a classic Acceptable Break from Reality. Very few players would enjoy the entire game being a tight Timed Mission, or constantly being railroaded into advancing the plot, or quests and missions frequently becoming permanently missable by time advancing.

Since this trope is widely recognized, this is occasionally subverted in more recent games by a mission being time-sensitive even if there's no explicit onscreen timer. Players who assume this trope is in effect when told to hurry up may be shocked to find that the game really does mean it this time. Periodic reminders that time is running out should be taken as warnings that, unlike with Magic Countdown, you can actually fail if you dawdle too much. If there's an In-Universe Game Clock, even an offhand mention of something that won't happen for several days may be a good thing for players to worry about.

Compare with Offstage Waiting Room and Sidetracked by the Gold Saucer. May overlap with Traveling at the Speed of Plot. May be caused by Orcus on His Throne.

Alternative Title(s): Side Questing Is A Free Action