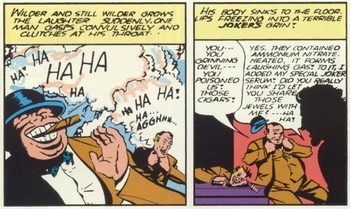 Honestly! Who accepts a cigar from the Joker?
There are multiple ways of poisoning someone. The classic is Tampering with Food and Drink, but you can also poison their eating utensils, tamper with their medication, or poison something they are likely to lick.
Advertisement:

Or, if they are a smoker, you can poison their tobacco. This has the advantages of being a substance they will willing take into their body without any urging from you, and may smoke it some time after you poison it; meaning there is no immediate link between you and their death.

This is most commonly done with cigarettes, but can also involve cigars, pipes, chewing tobacco, snuff or even E-cigarettes and vapes.

See also Explosive Cigar for another way to kill (or prank) with smoking materials.