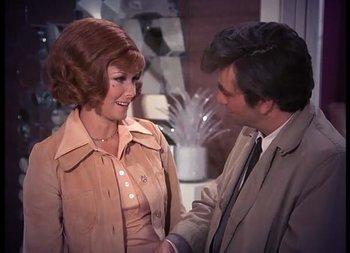 "Lovely but Lethal" is the first episode of the third season of Columbo.

Viveca Scott (Vera Miles) is the owner of Beauty Mark, a high-end cosmetics company. Beauty Mark has been struggling; sales are down, and Viveca is trying to fend off a takeover from corporate rival David Lang (Vincent Price). Viveca is pinning her hopes on a new wrinkle removal cream that her company has developed. But when she finds out that her chemist, Karl Lessing (Martin Sheen), is going to betray her and sell the compound to Lang, she beats him to death with his microscope. Viveca attempts to throw suspicion on Lang, but certain clues, like a scribbled note written in eyebrow pencil, point Lt. Columbo her way. There's also the matter of Shirley, Viveca's spy inside Lang's company, who knows a lot of secrets and also guesses what really happened to Karl.