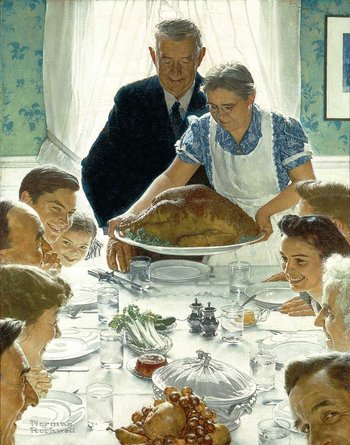 Freedom from Want, by Norman Rockwell.
"The year that is drawing towards its close, has been filled with the blessings of fruitful fields and healthful skies. To these bounties, which are so constantly enjoyed that we are prone to forget the source from which they come, others have been added... They are the gracious gifts of the Most High God, who, while dealing with us in anger for our sins, hath nevertheless remembered mercy. It has seemed to me fit and proper that they should be solemnly, reverently and gratefully acknowledged as with one heart and one voice by the whole American People. I do therefore invite my fellow citizens in every part of the United States, and also those who are at sea and those who are sojourning in foreign lands, to set apart and observe the last Thursday of November next, as a day of Thanksgiving and Praise to our beneficent Father who dwelleth in the Heavens."
—Abraham Lincoln, proclaiming the first official recognition of Thanksgiving Day in 1863
Advertisement:

In the United States, the holiday is traditionally dated back to a feast given in 1621 by the founders of the Plymouth colony in Massachusetts (often called "Pilgrims") to offer thanks to God for their survival past the first harsh year of the settlement. They invited the local Wampanoag tribe to dine with them. This was not an annual holiday, however, but a one-time event. Days of Thanksgiving were an old English custom, called by local authorities or church to celebrate some significant event, and could be declared more or less whenever. However, it is true that the completion of the autumn harvest would typically be marked with a Thanksgiving Day across most of New England and in other states settled by Yankees.

Subsequent festivals of national thanksgiving to God were held, if at irregular intervals. Inaugural US president George Washington, for instance, proclaimed one to be observed on the last Thursday of November in 1789, "acknowledging with grateful hearts the many and signal favors of Almighty God, especially by affording them an opportunity peaceably to establish a form of government for their safety and happiness." In 1846, New England author and activist Sara Josepha Hale,note also known for writing Mary had a Little Lamb believing that Americans needed to revive this tradition of giving thanks, started upon a letter-writing campaign advocating for a national day of thanksgiving. She wrote to anybody she thought could help: including Presidents Zachary Taylor, Millard Fillmore, Franklin Pierce, James Buchanan, and Abraham Lincoln. In 1863, seventeen years into Hale's campaign, President Lincoln declared one to be celebrated on the last Thursday of November, 1863, "as a day of Thanksgiving and Praise to our beneficent Father who dwelleth in the Heavens." (Lincoln had a lot to be thankful for, given how the campaigns of 1863 had gone.) The celebration has been repeated annually ever since, although Franklin D. Roosevelt transferred the date of the celebration from the traditional final Thursday to the fourth Thursday of the month (which is usually also the last Thursday, excepting those years when there are five Thursdays in November).

The choice of meat at the original feast is thought by historians to have been venison, but Ms. Hale put turkey on the map by publishing a Thanksgiving edition of her magazine, including turkey-centric feasts. The poultry industry capitalized on this through heavy advertising and PR events in the first half of the 20th century, cementing turkey as the Thanksgiving meal of choice, with an assist from the US military, which served turkey to the troops on Thanksgiving as the standard holiday meal thanks to turkey being relatively cheap. The tradition continues in the armed forces to this day, even resulting in the creation of a platoon-sized forward deployable Thanksgiving turkey dinner with all the trimmings, so troops on the front lines can have a taste of home. The White House these days receives two live turkeys for Thanksgiving, who receive Presidential "pardons" and a cushy life at a local Washington, D.C. petting zoo.note  A surprisingly recent tradition: Presidents have been given turkeys since 1873, but they got eaten. Kennedy spontaneously decided to give back the last turkey he received, Nixon spared some, and Carter and Reagan both sent theirs to petting zoos, but it wasn't until George HW Bush in 1989 that the first official "pardon" was issued and the event was made into an annual occurrence.

Traditionally, Thanksgiving involves getting together with one's extended family or friends and having an enormous dinner, typically consisting of turkey (hence the nickname "Turkey Day") with stuffing, mashed potatoes, yams, cranberry sauce and various other side dishes, followed by dessert, usually pumpkin pie and other pies. Because the US is a nation of immigrants, Americans from more recent immigrant backgrounds are likely to include some of their traditional dishes with the meal, particularly festive ones, so expect (e.g.) a lasagna at an Italian-American Thanksgiving, tamales at a Mexican-American one, pierogis at a Polish-American one, brisket at a Jewish-American one, and so on (roast lamb in particular will appear in several traditions, including Greek-Americans, Arab-Americans, and Armenian-Americans). The time not spent eating might be spent watching parades (some of which, such as the Macy's parade in New York City, are famous for their giant helium character balloons) or TV specials together.

American Football is also a major part of Thanksgiving, with the National Football League playing "Thanksgiving Classic" games — until recently, the only NFL games to be played on a weekday (if you're not counting Monday Night Football). Since 1970,note  when the NFL merged with the rival AFL; prior to then both leagues scheduled multiple Thanksgiving contests each year. the league has annually featured two nationally-televised afternoon games, one played in Detroit at 12:30 pm ET and another in Dallas at 4:15 pm ET; in 2006, a third, rotating-site game was added in prime time. College and high school teams often play games on Thanksgiving weekend as well, and impromptu family or neighborhood "Turkey Bowl" contests are a tradition in many places.

The day after Thanksgiving, commonly known as Black Friday, marks the official start of the holiday shopping season. The term originated in the early 1960s in Philadelphia, where it was used by local police in reference to the unusually heavy and disruptive pedestrian and vehicle traffic which would occur on the day after Thanksgiving, and began to see broader national use around 1975. Later an alternative explanation began to be offered: that "Black Friday" indicates the point at which retailers begin to turn a profit, or are "in the black".

It should probably be noted that, over the last few decades, observance of American Thanksgiving has become controversial in some quarters, due to the holiday's association with white colonialism and the subsequent genocide and/or subjugation of Native Americans in the US. "National Day of Mourning" protests have been held annually since the 1970s by indigenous activist groups such as the United American Indians of New England (UAINE) as a counter to conventional Thanksgiving observances.

Did we mention that there's also a Thanksgiving in Canada? Its origins aren't so mythologized, going back to the 16th-century English explorer Martin Frobisher, who had been trying to locate a northern passage to the Pacific Ocean. Frobisher's Thanksgiving celebration was not for harvest but in thanks for having survived the long journey from England through the perils of storms and icebergs. In 1578, on his third and final voyage to these regions, Frobisher held a formal ceremony in Frobisher Bay in Baffin Island (present-day Nunavut) to give thanks to God and in a service ministered by the preacher Robert Wolfall they celebrated Communion — the first-ever service in these regions. Years later, the tradition of a feast would continue as more settlers began to arrive in the Canadian colonies, and in 1879 Thanksgiving was officially declared a national holiday by Parliament.

The Canadian holiday occurs on the second Monday in October, but many of its traditions (a big meal, pumpkins, cornucopias, etc.) are shared with the US version. There are a few differences, however: there aren't really any Canadian Thanksgiving parades (the only parade on Thanksgiving is actually supposed to be for Oktoberfest, which is around the same time); also, Thanksgiving is still considered quasi-religious in Canada, and since the holiday falls in October, the link with the end of the football season isn't really there, although there are usually two Canadian Football League games played that day as "Thanksgiving Classics," which usually involve nearby rivals, such as Toronto vs. Hamilton or Edmonton vs. Calgary.note For those unfamiliar with Canadian geography, Toronto and Hamilton are both in Ontario, in the central-eastern part of Canada, while Edmonton and Calgary are in Alberta in the west.

For fictional stories that focus on this holiday, see Thanksgiving Episode.