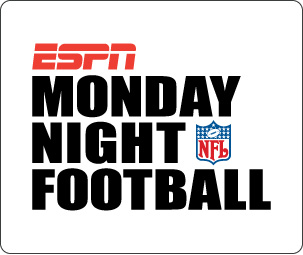 Are you ready for some football?

Monday Night Football is a long-running weekly broadcast of National Football League games. Debuting in 1970 on ABC, the program was conceived as both an answer to Major League Baseball's Game of the Week (and the NHL's Hockey Night in Canada) and a showcase for the best teams in the NFL, as the league traditionally uses the coveted Monday Night slot to spotlight matches between high caliber teams.

There were some Monday night games on CBS in the late 1960s as a sort of test run of the concept, but they were not played every week. Those games are not considered part of the series as such.

Monday Night Football was an instant hit in the ratings and quickly became a fixture in American pop culture. In particular, it made household names out of its announcing team: Play-by-play man Frank Gifford and color analysts Howard Cosell and "Dandy" Don Meredith. The series can also be credited with helping to make NFL football the most popular spectator sport in the U.S., as the broadcasts routinely highlighted the league's top players and rivalries. It even produced a spin-off of sorts, as ESPN (by then majority-owned by ABC) followed suit to launch Sunday Night Football in 1987.

Things changed when in 2005, when Disney (who by that time owned both ABC and ESPN) decided that declining ratingsnote exacerbated by the popularity of pro wrestling's WCW Monday Nitro and WWF Monday Night Raw and escalating TV contracts no longer made the series profitable enough for ABC to keep. A large part of the problem was that competitive balance had become a problem for the schedule makers, as the top teams from the previous season might no longer be so the next season. This resulted in late-season match-ups that were clunkers because one or the other of the teams were no longer a playoff contender, making the Monday night game less appealing to a mass audience. ABC's recurring death slot problem for shows that preceded the game (or followed the game depending upon the time zone) cropped up again once MacGyver was canceled (as no show could recapture the perfect chemistry of Richard Dean Anderson's iconic character leading into MNF), and — as many affiliate stations figured that out and pre-empted whatever was before the game with a local football show — was stuck airing 20/20 Downtown to complete viewer apathy.

ABC, among other entities, tried to get the NFL to agree to a concept that would eventually become known as "flex scheduling," which would be invoked when needed to replace a poor match-up with a better one. The idea was deemed impractical because of the logistics involved in moving a Sunday afternoon game to Monday night.

As part of that year's reshuffling of the NFL TV contracts, Disney decided to bid on the MNF contract but put the games on ESPN. With subscription fees in addition to regular advertising income, ESPN could bid more for the contract than ABC and still maintain profitability. The move of the top rated, icon show to cable angered many fans but NBC bid on the now-vacant Sunday night package. The Sunday night game was now considered the marquee game of the week and flex scheduling was put into place for this package as it's much easier to move a game 3 1/2 to 6 1/2 hours later in the day than a day-and-a-half later. Likewise, MNF ended up taking the games that were on the old Sunday night contract. Disney decided not to bid on the Sunday night package due to the then-dominance of Desperate Housewives on Sunday nights at the time; while NBC easily wins Sunday evenings, the ABC lineup of Once Upon a Time and Quantico has continued to do well as good counterprogramming (and now during the summer, Celebrity Family Feud, plus revivals of Pyramid and Match Game). ABC's Monday evening lineup of Dancing with the Stars and Castle has done better with a steady lineup through the year, even against MNF, while NBC is now stuck with a post-Super Bowl lineup on Sunday nights which generally trails the other networks.

Monday Night Football remains popular even with the jump to cable and routinely ends up in the Top Ten Nielsen ratings chart every Monday. (However, a side effect is that because local stations in the team markets syndicated the games from ESPN, ratings usually have to be adjusted to account for that; for instance, if the CW affiliate in a market carries the game, it's pretty obvious that men 25-54 haven't suddenly found an interest in Jane the Virgin for a night.) And with the games on cable, it's now possible to have a season-opening Monday night doubleheader with one game beginning at 7 p.m. Eastern time and the second at 10:15 Eastern. The later game usually involves two west-coast teams (usually the currently awful Oakland Raiders have been involved to much viewer and advertiser annoyance), though in 2010, it was played in Kansas City (a 9:15 p.m. kickoff locally). It also gives ESPN a prominent day to market everything about their network, and all programming is focused around both Monday morning quarterbacking and hyping that night's game.

Monday Night Football has been broadcast on:

Additional Monday night games that which were not officially part of the MNF package have been broadcast on: