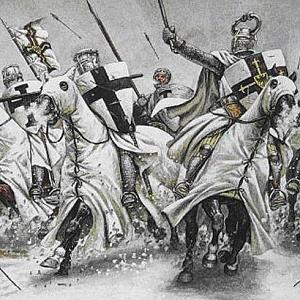 )
Throughout the history of the Deutschritter the German genius is very evident, romantic idealism implemented with utter ruthlessness.
—Desmond Seward, The Monks of War
Advertisement:

The Deutsche Orden (Latin, Ordo domus Sanctæ Mariæ Theutonicorum Hierosolymitanorum (OT) or the "Order of the House of St. Mary of the Germans in Jerusalem") is a Roman Catholic and monastic religious order, more commonly known as "The Teutonic Knights." They are considered to be the ancestor for the popular set of virtues

known as Germanic Efficiency. Traditionally founded c. 1190 A.D. by merchants from Bremen and Lübeck in Acre as a hospital service for Germans in the Holy Land (on the grounds that neither Richard the Lionheart nor Philip of France particularly liked or cared about the German crusaders), by 1198 it imitated the older crusading orders, the Hospitallers and Templars, in acquiring knightly brothers whose original mission was to protect pilgrims, but who soon expanded their activities to include military actions against Muslim enemies of the Crusading states. Like the Templars, whose rule they substantially adopted, they wore as their habit a white mantle with a cross, but a black rather than a red one. (It would be some time before the form was standardized into the Tatzenkreuz or "Cross patée" version borne today;)

Even before the decline of the Crusader States in the early thirteenth century, they sought other fields of operation, since the Hospitallers and Templars dominated pretty much all the available real estate in the Middle East and Cyprus. Under the most important of the early Grand Masters Hochmeister ( literally "High Master") Hermann von Salza (1209-1239), a Thuringian knight who was a favourite of both Pope Gregory IX and of the Holy Roman Emperor Frederick II and established the Order's habit of trying to remain in the good books of both the Papacy and the Empire, the Order expanded first into the so-called Burzenland of Transylvania, acting as a bulwark against the Pagan Cumans who tended to raid through the Carpathians. They were remarkably successful at this and significantly expanded their granted territory and then, after an uncertain incident which seems to have involved them trying to get their land put under Papal sovereignty (essentially swiping it from under the King of Hungary, Andrew II's, nose) and their resultant expulsion in 1225. Then, in 1226, they were invited into the Baltic area at the request of Conrad, Duke of Masovia, to crusade against the heathen Prusai (a people speaking a now-extinct language related to Lithuanian and Latvian) who he'd annoyed one time too many and wanted dealt with while he turned his attention to scrapping with his relatives over the Grand Duchy of Poland. The Knights accepted in 1230 — after Hermann had carefully made sure that all lands conquered by the Order were to be administered by it. This was the foundation of the so-called Ordensstaat (or "Order-state"). After the fall of Acre in 1291, the Grand Masters moved their residence first to Venice, and then in 1309 to the Marienburg (now Malbork in Poland).

The Livonian Brothers of the Sword were an originally unrelated crusading group, but were eventually reluctantly absorbed into the Teutonic Knights (who had previously inspected them and stated that they wanted nothing to do with them, until the Pope forced them) as the Livonian Order. Consequently this article (like many others) tends to lump them in together, but an important distinction is that the Livonian Order ruled the northern territory of Latvia-Estonia, whereas the Teutonic Knights controlled East and West Prussia — conquering Lithuania would have united the two (and created arguably the most powerful state in Northern Europe). The Pope turned the Knights' attention to fighting not just the pagan Lithuanians, but also the Russian "schismatics" in the form of the Republic of Novgorod (hence their appearance as stand-ins for the Nazis in Sergei Eisenstein's Alexander Nevsky), who they were gearing up to fight anyway, over control of the mouth of the Volga (which in turn controlled trade down into Eastern Europe, the Balkans and the Black Sea) and the Baltic.

As the various Prusai tribes were conquered, the Order settled the land with German colonists, developing a powerful and sophisticated civilization outside the borders of the Holy Roman Empire (though at least at first under nominal suzerainty of the Emperor), which was controlled wholly by the representative of the Order in each particular territory (the Landmeister) and gradually integrating the natives into it. After the conquest of Prussia had been completed, the Order expanded eastward, throughout the 14th and 15th centuries — or at least tried to.

The very success of the Order (by the late 14th century it was successful enough that it had turned Crusading into a package tour industry for Europe's knights in between rounds of The Hundred Years War, with one participant being a certain Henry Bolingbroke - later Henry IV of England) brought about its downfall. Having substantially converted the heathen populace of Lithuania, Latvia, and Estonia, they came into jurisdictional conflict with the now converted natives, particularly after 1386, when Jogaila, the leader of the Lithuanians, was baptized and became the Christian King Władysław Jagiello of Poland. The Order refused to accept that the Lithuanians were Christian, and recriminations and open warfare between the Order and the Poles were the result, with the latter gradually gaining the upper hand. The defeat in the battle of Grunwald (German name: Tannenberg, 15 July, 1410) and a rebellion by the local nobility and cities aided by a Polish intervention (1455-1466) resulted in the Order sustaining large territorial losses and having to accept Polish suzerainty over the part of East Prussia they retained. Due to the loss of Marienburg, the Order had to move its residence to Königsberg (modern Kaliningrad).

The worst challenge to the Order, however, came with the Protestant Reformation. In 1525, the Grand Master, Albert I of the Brandenburg branch of the House of Hohenzollern, converted to Lutheranism, repudiated his vows and seized upon the lands of the Order, making himself the first Duke of Prussia. Many of the knightly brethren followed suit, while others remained faithful to Catholicism. The Grand Mastership thereafter reverted to the Landmaster within the Kingdom of Germany, who became known as the Hoch und Deutschmeister. After the Hohenzollern dukes of Prussia became extinct in 1618, their title and lands were inherited by their cousins, the Margraves of Brandenburg, who went on to found the Kingdom of Prussia and eventually the German Empire.

The Teutonic Knights, who were actually an organization dedicated to conversion rather than colonization (even if they did mix the two together), were later appropriated by the most radical of German nationalists as representatives of the fabled Drang nach Osten ("Drive to the East"). (Note that in some older works, this is actually viewed as a positive characterization.) This has led to the real Teutonic Knights, nasty people as they may have been, like most mediæval warriors, being subjected to a Historical Villain Upgrade or worse, as an example showing that All Germans Are Nazis. Ironically, despite the Nazis appropriating the Teutonic Order's symbols for its propaganda, the Order itself, which, by 1930s, was dedicated purely to peaceful endeavors, was violently suppressed during the Third Reich. It was reconstituted only with the defeat of the Nazis in 1945 and currently has about 1,000 members providing spiritual guidance and care for the physically infirm, mostly in German speaking lands.

Works Associated with the Teutonic Knights: