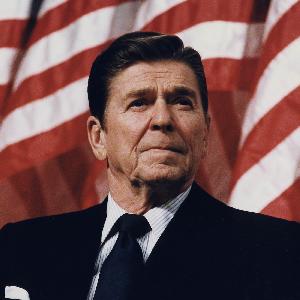 "Mr. Gorbachev, tear down this wall!"
Doc Brown: Then tell me, future boy, who's President of the United States in 1985?
Marty McFly: Ronald Reagan.
Doc: Ronald Reagan? The actor?! Then who's Vice-President, Jerry Lewis?
— Back to the Future

Ronald Wilson Reagan (February 6, 1911 — June 5, 2004) was the 40th President of the United States, serving from 1981 to 1989. He was the sixteenth from the Republican Party, serving between Jimmy Carter and George H. W. Bush. Reagan is well-known for restructuring the USA's political economy to allow the wealthy keep more of the money they had earned (under the theory that high taxation stymied economic growth). and working together with Mikhail Gorbachev to end the Cold War. He also was the last President to be in office during a war in which the United States officially declared itself to be neutral: namely the Falklands Conflict between the United Kingdom and Argentina.

Yes, he's the first actor to become President. However, many of the jokes about that don't work very well, since, when his political career commenced in 1966, he was only the "former actor who's running for Governor of California". After he vacated that office, he became known as the "former two-term Republican Governor of California who's running for President." People today will more likely know Reagan for his Presidency in The '80s; that said, his former acting career was and still is a big point of notoriety, to the point where it arguably created the "President Celebrity" archetype that continues to permeate popular culture to this day (even though Reagan was a B-lister during his acting career; it wouldn't be until the election of Donald Trump in 2016 that an actual media celebrity would be put into the Oval Office).

More simply, the entire leadership of the USA's Republican Party worships him, most of the Democrats' leadership approve of his economic policies and admire his ability to extract concessions from an opposition party that was still mildly in favor of The New Deal (his presidency was the last where the heavily Democratic GI Generation who grew up during the Depression/ New Deal Era was a significant portion of the Congress/ Electorate), and a small minority of the Democrats' leadership (Elizabeth Warren, etc) assert that while the fractures which threaten to tear American society apart did not begin under Reagan his Presidency was when the wealth gap and corrosive influence of wealth upon politics began to worsen exponentially.

Many Democrats do think fondly of him, and are known as "Blue Dogs" or "Reagan Democrats". Supporters praise him for getting the USA out of the "Stagflation" crisis of the 1970s that was triggered by the 1973 Oil Crisis and worsened by a gross misinterpretation of Keynesian Economics (politicians ignored expert advice and increased government spending when they should have been cutting it), making the USA's military a close second to the USSR's in conventional armaments, a close second to the Soviets in nuclear weapon numbers (40,000 to 30,000) but with a far superior 'first'/'decapitation' strike capability, negotiating an end to the Cold War, cutting government support for single parents and the unemployed, and his economic policies which heavily favored the expansion of the financial sector and an increase in the nominal/paper value of the country's GDP ("Reaganomics" as it was called) by creating the Savings-and-Loan bubble which burst in '86-'89.

Detractors cite the increased dependence upon and vulnerability of the economy to an increasingly unstable financial sector, the growing impoverishment of the poor, the growing wealth of the ultra-rich via the extraction of wealth from the poor, the inarguably ineffective and debatably doomed-to-fail "War On Drugs" which again disproportionately affected the poor, the 191 percent increase in the national debt, his union-busting (specifically his handling of the PATCO air traffic controllers strike), the slow response (for whatever reason) to the AIDS epidemic, his support for Islamic fundamentalist militants (to counter Communism e.g. Al-Qaida's precessors, the Mujahedeen, in Afghanistan), and his nearly triggering the virtual extinction of our species during Able Archer.

The universally acknowledged problem of his administration was massive corruption. While not necessarily from the man himself, his "hands off" style of leadership led to his officials committing federal offenses without check. Various scandals from his administration led to the investigation, indictment, or conviction of over 138 officials, the most for any US president. The most infamous one was the "Iran-Contra" affair, where military officials sold weapons to Iran in exchange for the release hostages in Lebanon, plus money to fund the Contras, an anti-Communist guerilla group in Nicaragua that was revealed to have committed human rights violations. All of that despite explicit congressional bans on any funding going to the Contras and an embargo against Iran that is still in place today. Though the political fallout from Iran-Contra was not particularly long-lived, especially after half a dozen of those implicated were pardoned by George H. W. Bush, two associated events left a mark on American popular culture: Lt. Col. Oliver North of the National Security Council shredding so many documents that the paper shredder broke down, and the coincidental release of an Arcade Game titled Contra. In 2019, a phone conversation between (then Governor of California) Reagan and President Nixon surfaced, where Reagan described African delegates at the UN "monkeys" who barely looked comfortable wearing shoes, an indication that Reagan in private may have held racist views towards non-white people.

Outside of the US, he is seen as a doofus in Germany due to his former career as a B-movie actor, as a Saint in much of the former East Bloc for his - supposed or real - role in bringing down the USSR and as a villain in Nicaragua and some other parts of Central America due to his role in Iran Contra.

If you see someone in a film or TV show talking about how great Reagan was, then it's a surefire indication that the character is a US-Republican party member or someone with classical-liberal or neo-liberal leanings. Conversely, if you see someone in a film or TV show disparaging Reagan, expect the character to be a social-liberal or socialist or anarchist or Marxist. For British media, substitute Margaret Thatcher for Reagan to precisely the same effect as the two had faith in very similar socioeconomic belief systems - the pro-free-market, anti-government ideology of Neoliberalism - and presided over their respective countries during roughly the same time period (1979–1990). Reagan's other use in popular culture is to evoke the 1980's, so expect him to be referenced in anything set in a Popular History version of that decade or any political satires or topical shows from that era.

Reagan was the first president since James Monroe not to fall victim to the "Curse of Zero" (sometimes called the the Curse of Tippecanoe), in which virtually every president elected in a year ending in zero had died in officenote (William Henry Harrison (1840), Warren Harding (1920) and Franklin D. Roosevelt (1940) all passed away due to illness, while Abraham Lincoln (1860), James Garfield (1880), William McKinley (1900) and John F. Kennedy (1960) were all assassinated). That's not to say he didn't come close to meeting an untimely end in office, however, as barely three months into his first term, he was shot and severely injured by John Hinckley, and only survived due to prompt medical care. Reagan remains the only sitting president to be injured, but not killed in an assassination attempt, and his brush with death is credited with having boosted his approval ratings from "pretty damn good" to "astronomical," and helped him score arguably the most decisive victory in a seriously contested presidential election when he was re-elected in 1984, with only 2,000 Minnesota voters coming between him and victory in every single state.

Fun fact: Reagan was once a member of the Democratic Party. He also was very, very addicted to jelly beans. He started eating them when he quit smoking, and he seriously had jelly bean cup-holders placed on government planes. When he won in 1980, he wanted a jelly bean flag of red, white, and blue to be created to the occasion. There were no blue-colored jelly beans at the time, so the Jelly Belly company created the blueberry flavor specifically for the ceremony. It ended up becoming one of their most popular flavors.

As always, be cool and use the Rule of Cautious Editing Judgment: lots of people have strong opinions on him, his legacy and his economic policies.

There is a story that Ronald Reagan was playing Trivial Pursuit with his staff aboard Air Force One, and received the question "Who said 'I am the Errol Flynn of B-movies?'". Reagan correctly answered "I did." In any case, the Errol Flynn quote is accurate, and reflected Reagan's dissatisfaction over his movie career, which rarely provided the good parts that Reagan wanted, as he typically ended up playing the archetypical "the hero's best friend/sidekick" character.

Ronald Reagan made his film debut in a picture called Love Is on the Air in 1937. His first big break was a supporting part in the Bette Davis prestige drama Dark Victory (1939), but that part unfortunately failed to lift him out of the B-movie ghetto. In 1940, he played real-life American Football Player George "The Gipper" Gipp in the movie Knute Rockne, All American (about a Notre Dame football coach), which featured the line, "Win One for the Gipper." "The Gipper" became one of Reagan's nicknames. He was ineligible for combat duty in World War II due to extreme nearsightedness, so Reagan spent much of the war making Army training films.

Another film Reagan famously played in was the comedy movie Bedtime for Bonzo, in which he costarred with a chimpanzee in a standard Ain't No Rule story. Reagan always displayed a sense of humor about this movie; he's famously said to have once signed a promo photo of himself and Bonzo with the inscription "I'm the one with the wristwatch."note  During his Presidency, when Clint Eastwood was running for Mayor of Carmel, California, Reagan jokingly telephoned Eastwood and quipped "What's an actor who once appeared with a monkey in a movie doing in politics?", referring to Eastwood's role in Every Which Way but Loose and having some Self-Deprecating Humor at the same time. He viewed That Hagen Girl, a 1947 melodrama co-starring Shirley Temple, as his real Old Shame. It's even rumored that Reagan tried to suppress or destroy copies of that film. There's also a common story that he was originally slated to star in Casablanca, which derives from a claim made by the Warner Bros. publicity office while promoting his film Kings Row. Like many similar claims made by the Warner Bros. publicity office during the period, it has no basis in fact.

His most famous role was probably in the 1942 film Kings Row, which contains the famous line: "Where's the rest of me?" (his character had lost both of his legs.) Where's The Rest Of Me? was the title of his 1965 autobiography. He had a memorable Playing Against Type role as a brutal and abusive crime lord turned Corrupt Corporate Executive in his last film, The Killers (1964) by Don Siegel (of Dirty Harry fame). Cinephiles and film historians actually consider that role his best performance since he held his own against strong performers like John Cassavetes, Lee Marvin and Angie Dickinson (who he slaps around in a notorious scene).