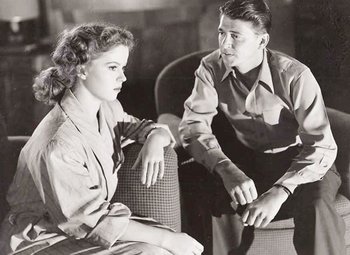 That Hagen Girl is a 1947 film directed by Peter Godfrey, starring Ronald Reagan and Shirley Temple.

The opening takes place in 1930. Mr. and Mrs. Gateley, an upper-crust family in the small town of Jordan, Ohio, escort their daughter Grace home from the train station. It is obvious that Grace has had some kind of mental breakdown; bars are put on the windows to her room and she is forbidden visitors. Especially forbidden is Tom Bates (Ronald Reagan), a young law student and Grace's boyfriend, whom the Gateleys blame for whatever happened to Grace. Scandal and gossip-mongering lead Tom to leave town to study law, and Grace remains shut up in her parents' house for years.

Meanwhile, a working-class couple, the Hagens, come home on the same train that bore the Gateleys. Mr. and Mrs. Hagen have adopted a newborn girl. Town gossips all come to the same conclusion—little Mary Hagen is the illegitimate daughter of Tom Bates and Grace Gateley. Seventeen years pass, and Mary Hagen (Shirley Temple) is a social outcast, without even knowing why. When now-prosperous lawyer Tom Bates comes back to Jordan after 17 years away, however, secrets are revealed.

A notorious critical and commercial bomb that torpedoed Temple's attempt to transition to grown-up actress and Reagan's attempt to become an A-list movie star. Reagan was later said to regard it as his Old Shame.