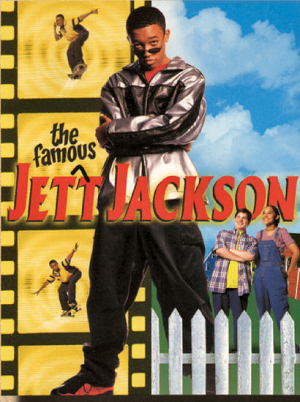 The Famous Jett Jackson is a Disney Channel series revolving around Jett Jackson who is, well, famous. Specifically, he's the star actor in the Spy Fiction Show Within a Show Silverstone. The premise, as explained in the Opening Narration, is that he was lonely in Hollywood and got the production of the show moved to his hometown, Wilsted, North Carolina, where he can lead a more normal life. As a Disney Channel main character, Jett is inevitably part of a ¡Three Amigos!, with his male best friend J.B. and his female best friend Kayla. Most episodes deal with Jett's everyday life, and a B-Plot playing out an episode of Silverstone.

The series lasted from October 1998 to June 2001, running for a total of 65 episodes over three seasons. After the series reached its 65-episode limit, a Disney Channel Original Movie was made to conclude the series.

Notable among Disney Channel shows for being set in the South and for having unusually sophisticated episodes about race, dealing with subjects like Jett's relative privilege compared to the average black American and Kayla's identity issues about being mixed-race.