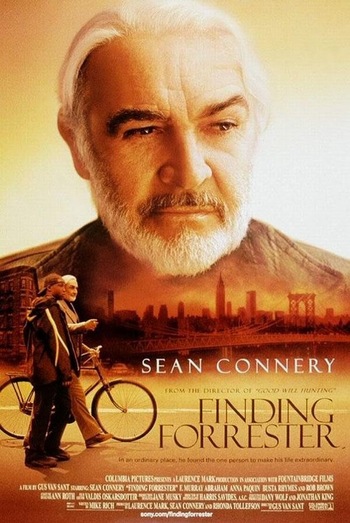 Finding Forrester is a movie from 2000 about a boy from a poor neighborhood in the Bronx with talents for writing and basketball. When his high test scores and athletic skills get him a scholarship to a prestigious prep school, he meets a famously reclusive author who helps lead him to success. The film is starred by Rob Brown as Jamal, Sean Connery as the titular Forrester William Forrester in what would end up being his penultimate film role before retiring in 2003. The cast is completed by Anna Paquin, F. Murray Abraham and Busta Rhymes.

It was Gus Van Sant's more proper follow-up to Good Will Hunting (after his poorly-regarded Psycho remake) and its perceived failure led to an eight year sabbatical from mainstream Hollywood filmmaking, doing a string of minimalist movies where he had a hand in the writing, before coming back with Milk.

The line "You're the man now, dog!" spawned the humor website YTMND.