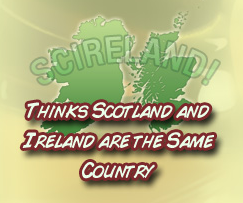 "The Scots (originally Irish, but by now Scotch) were at this time inhabiting Ireland, having driven the Irish (Picts) out of Scotland; while the Picts (originally Scots) were now Irish (living in brackets) and vice versa. It is essential to keep these distinctions clearly in mind (and verce visa)."
— 1066 and All That, "Important Note"
Advertisement:

Scotland, Northern Ireland and The Republic of Ireland condensed into the same place. The Loch Ness Monster, Leprechauns, bagpipes, shamrocks, threatening people with shillelaghsnote pronounced "shuh-lay-lee" and meaning "blunt instrument"; see Irish Names for more help with the peculiarities of Irish pronunciation, and note that it will be little help for names in Scots Gaelic, which is a separate (though related) language., potatoes, haggis, plaid (actual plaid, or tartan), kilts, clans, castles, caber tossing, and a lot of angry drunk people.

This is the only other part of the British Isles that's not London. In fact, the Republic of Ireland isn't politically part of Britain, but if Hollywood can't get geography right then politics don't stand a chance. Wales sometimes gets lumped in as well, the few times it's featured outside of UK media. This trope is probably helped by the fact that Ireland and Scotland are, to much of the world, the two main "Celtic" nations.

Not to be confused with the American ethnic term 'Scots-Irish'

, many of whom have more English than Scottish ancestry.

It's worth noting the Irish and Scots have a long history of cultural connections. The Scots are partly descended from the Scoti, a tribe of Irish Gaels who settled in Scotland in the early Middle Ages, and to this day Irish (Gaeilge), Scottish Gaelic (Gàidhlig) and Manx (Gaelg) are considered mutually intelligible languages

. Also, a good chunk of the Northern Irish population is descended from Scottish "planters" (who were, however, mainly non-Gaelic speaking lowland Scots). And plenty of Irish people moved to Scotland, particularly Glasgow, in the nineteenth century. So, the trope is somewhat rooted in fact, albeit much more loosely than their frequent conflation in American media would seem to imply.

The prevalence of this trope in US media is probably because some Americans find Irish and Scottish accents difficult to distinguish from one another. It's also not helped by the fact that while most Americans can identify shamrocks, leprechauns, and the color green as being stereotypically "Irish" while bagpipes, tartans, and the Loch Ness Monster are stereotypically "Scottish", St. Patrick's day parades and other Irish festivals sometimes feature people wearing kilts and playing Highland bagpipes rather than the Irish uilleann pipes.

This trope is scarce in Canadian media, however, as the Irish and the Scots are seen as completely distinct nationalities. It's said that the longer an Irishman lives in Canada the more Canadian he gets, but the longer a Scotsman lives in Canada the more Scots he gets. Some Scotsmen have lived in Canada for so long that their accent has become completely indecipherable.note Scotty from Star Trek, a Scotsman played by a Canadian, may be a special case. The same applies to Europe, where the differences between the two are also more widely understood. And, of course, it's a Dead Horse Trope within the UK and Republic of Ireland because kids learn in school pretty early on that they're distinct neighbours.

Compare Britain Is Only England, Norse by Norsewest, Spexico, Ancient Grome, and Mayincatec. See also Violent Glaswegian, Fighting Irish, Oireland, Bonnie Scotland. Oddly, Scottish actors and actresses have a disproportionate tendency to be cast as Irish characters. Whether this is a side effect of this trope or whether it actually helps enforce it is anyone's guess.