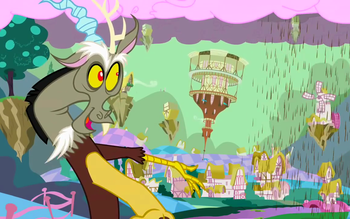 Who needs reason when you can have chocolate rain?note Some stay dry and others feel the pain...
"Praying to yourself, my Lord? That's not a good sign. Or perhaps it is. Prince of Madness, and all that."
— Haskill, Shivering Isles
Advertisement:

This god isn't Evil in either sense (or at least if it is, that's not the point) or even a Jerkass God; it is simply insane. Its mad throes create and destroy in equal measure, leading to untold chaos. That there is a universe at all is usually due to it being Sealed Evil in a Can, dormant, or so random that it's been less destructive over the past few aeons.

It might pose as a sane and good god because it has momentarily grown Bored with Insanity. Of course, that does not usually last, as sanity tends to bore it greatly as well. If he is good in some sense he'll be the King of All Cosmos and fond of working In Mysterious Ways.

Expect them to act Above Good and Evil, or that it follows Blue-and-Orange Morality that anyone can understand... if you just gaze into the abyss of madness long enough. If especially mad and powerful, it may also be an Eldritch Abomination, and even if it isn't one, it is highly likely that it will ascend into one. Can overlap with Almighty Idiot when the Mad God is so mad that it destroys their mind. It may not cause insanity or revulsion to observers, but that's usually iffy, and depends on if it has enough presence of mind to take on A Form You Are (at least mildly) Comfortable With.

Compare A God Am I, a character so crazy that they only think they are gods. Contrast A God, I Am Not, where a god-like being refuses to be called a god to avoid something like this occurring.

Not to be confused with the Stop Motion series Mad God, although see below under Web Original.