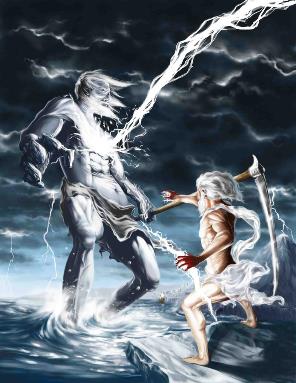 When there are multiple gods in a universe, they often come into conflict with one another, just like humans tend to do in real life. This kind of conflict usually plays out between two gods, with lesser gods or other entities like angels or demons functioning as their armies.

In some cases, the conflict plays out long before the time of humans. In a Creation Myth, the winning faction is the one that rules over the world today, and often they are the one that is worshiped by the people. Depending on who wins, this could bring about or end The Dark Times.

In other cases, the conflict is neverending. The two factions or two gods don't ever stop fighting, or when they do, it will be at the end of time. This scenario is often used to justify the Balance Between Good and Evil, especially when the two factions are led by a God of Good and God of Evil.

If the conflict escalates enough, it can lead to a Götterdämmerung. Compare Cosmic Chess Game, as well as Rage Against the Heavens when mortals fight the gods instead.