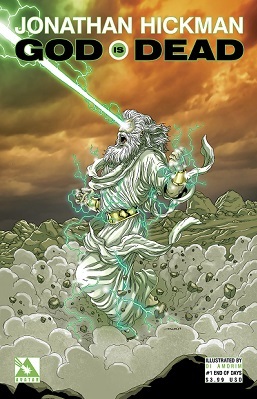 Picture this scene: one day after a summer filled with strange, unnatural weather and staggering natural disasters, a very tall and muscular old man with a head of long white hair and a white beard is walking through Vatican City. He steps into the Sistine Chapel and looks up at that most famous of paintings on the ceiling, The Creation of Adam, where God stretches forward his hand to pass life into Adam. The old man with the flowing white hair and beard considers it for a moment... and then declares it to be ridiculous, and says that he will never be satisfied with such a bloodless and tame form of worship. He calls down a lightning bolt that strikes right through the roof of the chapel, and as he makes himself a throne there he declares his identity for the first time: Zeus, King of the Gods.

What? Not who you were expecting?

Not long after the appearance of Zeus, gods of multiple pantheons begin appearing, (most prominently the Greek, Norse, Aztec, Egyptian, and Hindu deities) and hold a conference where they agree to not fight and allow each other to take control of their traditional territories. The gods then focus on taking complete control of the Earth, recruiting followers, mercilessly repressing any non-believers, destroying any knowledge that doesn't come from themselves, and starting to crush the few factions (such as the US Military) that attempt an organized resistance.

Gods being gods, however it's not long before that truce between them goes out the window and there's a mad round of divine combat as the various pantheons battle each other for total control of the world. And unknown to the gods, there is an underground cabal of scientists and soldiers called The Collective who are looking for a way to understand and defeat the gods, even if it means attempting to create a new one to help them save humanity from the grip of the divine oppressors.

Originally a limited series coauthored by Jonathan Hickman (best known for works such as The Manhattan Projects and East of West, among others) and Mike Costa. After the conclusion of the initial six issue arc, God Is Dead has since become an ongoing series with Mike Costa as the sole writer.