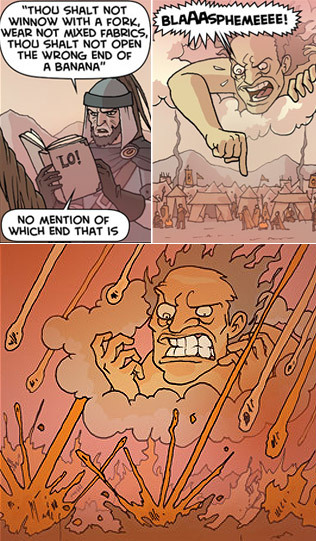 "Really, the only surprising thing was that it didn't happen sooner."
Pit: But you would never abuse your power, right?
Palutena: Of course I would! That's part of the goddess job description.
— Kid Icarus: Uprising
Advertisement:

These gods aren't lazy, but you really wish they were.

Perhaps they view all of life as a cosmic game, with humans as mere pawns and tools. Perhaps they're hungry for worship, either out of necessity or just out of a huge ego, and are willing to resort to manipulation and worse to get it. Maybe they're just keen on Disproportionate Retribution (a very common trait in religions throughout history). Maybe it's the age-old adage "power corrupts", or maybe they're just overgrown immortal children with supernatural powers or The Sociopaths, but whatever the case, the gods are just jerks. They view human life as a source of entertainment or an inconvenience.

This trope is Older Than Dirt. The Ur-Example might be Inanna, Sumerian goddess of getting laid and ultraviolence. As might be expected from someone of that description, she took exception to being spurned by the hero Gilgamesh and summoned a heavenly bull to go on a rampage through his city, and if her father denied her that bull, she would have caused a Zombie Apocalypse. It did not help that as he turned her down, he listed all her exes and how she arranged their terrible deaths.

Compare and contrast Abusive Precursors, and for cases where Jerkass doesn't really cover it, God of Evil, and God Is Evil; or, for a milder version, consider God Is Flawed. Often worshiped by the Corrupt Church and/or the Religion of Evil. Related to God and Satan Are Both Jerks as well as World of Jerkass. Anyone playing Religious Russian Roulette with a Jerkass God probably won't like how it ends. In video games, where you are the god, see Cruel Player-Character God. For the inversion, see God Is Good.

In real-life mythoi, this trope is often a product of Values Dissonance and Depending on the Writer, as whatever the gods do in their stories is often considered okay in the time period where the stories were written, but not in the present. Also, having different people write and tell different stories and myths about gods means that the deities in question are very prone to Alternate Character Interpretation by whoever is writing the story, because even back then, people liked to project themselves and their opinions onto characters, even if the characters are gods. Because of that, mythological characterization and continuity regarding the gods and other mythical figures tends to fluctuate wildly from story to story. Some of these authors and storytellers also made some gods grab the Jerkass Ball from time to time, which eventually spread out among public opinion and turned some deities from being viewed as nice to being seen as evil due to people remembering deities more for the bad things they did rather than for their heroic actions (the Everybody Hates Hades trope is a good example of that). What was considered okay and acceptable back then isn’t always what is considered okay and acceptable today, because society and its values change over time. Gods and the stories surrounding gods often reflect the cultures and societies that worshipped them. Since civilizations of ancient times or societies of other nations have different values and codes of ethics than the ones we have, then a god who is considered a Jerkass God by one civilization and time period may be viewed as a heroic god instead by another civilization and time period.

The Goddess Called Him Ugly

We've been too harsh on Aqua.

The Goddess Called Him Ugly

We've been too harsh on Aqua.