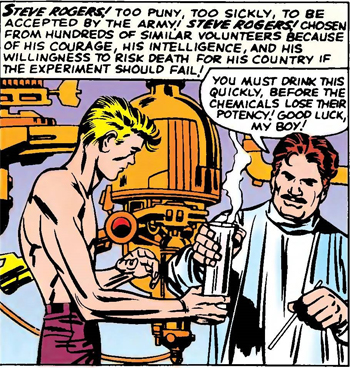 And be sure to drink it all, because sometimes the good stuff is on the bottom.
Victor Mancha: Wait, back up. Your secret origin is drugs? Doesn't that kinda set a bad example for little kids?
Cloak: I am not your ROLE MODEL!
— Runaways
Advertisement:

A hero who doesn't have his powers or abilities naturally, but has to get them from a process of digestion or injection of a specialized compound. For obvious reasons, depictions of this took a nosedive due to Moral Guardians, as depicting heroes taking what seemed to be drugs became a strict no-no.

Heroes nowadays may get such treatments only once, often involuntarily (due to evil experimentation) or as formal medical treatments. You're most likely to see this being done by villains, with an Anvilicious addiction metaphor in effect.

Power-Up Food is the case when the abilities come from common foodstuffs. Applied to enough people at once, and it becomes a Mass Super-Empowering Event. If (as in the case of Captain America, pictured right) only one person gets it, it's a Disposable Superhero Maker. A Superhuman Transfusion (especially if it's from someone who drank Super Serum) usually has the same effects. If the superpower being given is Super Intelligence, it overlaps with Genius Serum.

Compare Psycho Serum and Bottled Heroic Resolve. See also Power Source and Higher Understanding Through Drugs. For a similar trope in commercials, see Cereal-Induced Superpowers. In many ways, this is the science fiction and pulp equivalent of the Magic Potion.