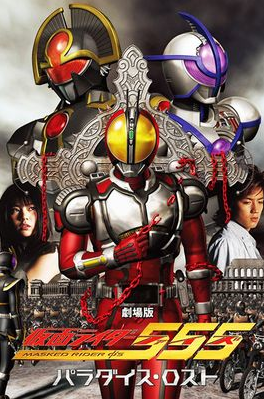 It is considered as a continuation of an alternate ending, where Smart Brain and the Orphnochs have won the war in the near Future and accomplished their goal of world domination, with 90% of Earth's population being Orphnochs while the human race is diminishing to near-extinction. Takumi Inui / Kamen Rider Faiz has gone missing and is presumed killed in an attack by Smart Brain's Riotroopers led by Leo / Kamen Rider Psyga. His friend Mari Sonoda leads a human resistance group to fight back against Smart Brain, attacking their headquarters to steal the top-secret "Emperor Belts". The Orphnochs Yuji Kiba, Naoya Kaido and Yuka Osada seek a peaceful coexistence between both Orphnochs and humans, but receive opposition from both humans and Smart Brain. Smart Brain's chief meanwhile seeks to find a user for Smart Brain's second Emperor's Belt, and is eyeing Kiba as a candidate.