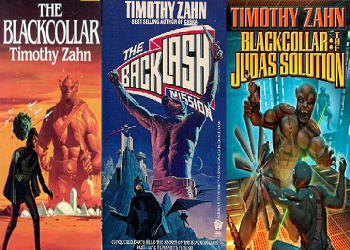 "I won't waste my breath telling you you're crazy. Do I get to know anything about this one in advance?"
— Allen Caine, The Blackcollar
Advertisement:

In the early 25th century, the Terran Democratic Empire is drawn into a war with an alien race known as the Ryqril. Among the weapons they develop in hopes of defending themselves are the Blackcollars, ultimate guerilla fighters with enhanced speed and reflexes, equipped with ancient but undetectable weapons such as slingshots and nunchaku.

Unfortunately, it was a case of too little, too late. Humanity lost the war thoroughly, and the Ryqril took over government of the TDE's worlds by means of loyalty-conditioned administrators and security personnel, backed up by heavily-armed Ryqril soldiers. Twenty-nine years later, an underground member named Allen Caine is equipped with carefully forged identification papers and sent on a mission that could change the balance of power once again.

Unfortunately, his resistance cell is destroyed before they can provide him with the papers he needs to complete his mission, so when he arrives on the unfamiliar planet of Plinry he is forced to seek help from the local Blackcollars, led by the enigmatic Damon Lathe.

So begins The Blackcollar, a sci-fi novel by Timothy Zahn. It is the first in a trilogy which also includes The Backlash Mission and The Judas Solution.