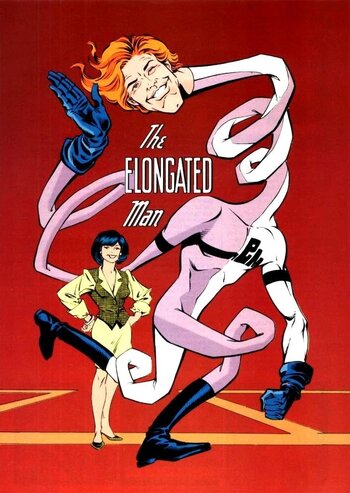 Ralph Dibny a.k.a. Elongated Man was created in The '60s to be a Captain Ersatz of Plastic Man because the people at DC Comics didn't realize that they technically already owned Plastic Man. In a way, this makes him the first Silver Age Legacy Character not to share a name with the character he was inspired by. He first appeared in "The Flash" #112 (April, 1960). His wife and partner Susan "Sue" Dearborn was introduced in #119 (March, 1961). Notably, he was the first Super Hero to drop his Secret Identity and marry his Love Interest (in her first appearance, too!).

A close friend of the (second) Flash in whose series he appeared often. He got his own series in the backpages of Detective Comics, lasting from issue #327 to #383 (May, 1964-January, 1969) with several new stories appearing in the same magazine during the 1970s, though at irregular intervals. The series formula was to have Ralph and Sue traveling the globe, investigating crimes along the way. Don Markstein, a comic book historian, described them as a superhero version of Nick and Nora Charles.

Ralph also joined the Justice League in 1970s. Along with Sue, he was an important part of the League's more comedic period. Sadly, he's remembered today more for the fact that his wife was both raped AND murdered in Identity Crisis. He died shortly afterwards in 52 while trying to find a way to resurrect her (at least he brought down an evil sorcerer and a major demon in the process). Sadly, the demon escaped later, despite the trap seemingly being absolutely inescapable. They have both reappeared as ghosts since, with the ability to possess people for short periods of time, à la Deadman.

After many years they finally reappeared in two separate comics from DC. They've been in Convergence: Justice League of America, a two-part book that focused on the Detroit League and had the Dibnys alive, married, and very much in love. In the main DCU, Ralph has appeared under another name: Big Shot in Secret Six. Sue has reappeared in the same book as well.

He appeared in Justice League Unlimited as a member of the newly-expanded League, and in Batman: The Brave and the Bold, where he spent his time lamenting Plastic Man's fame.

The character appears in the fourth season of The CW's The Flash, portrayed there by Hartley Sawyer. This iteration of Dibny is a fast-talking private investigator who, upon gaining his stretching ability, joins Team Flash in their crimefighting and investigation against Clifford DeVoe.

He also appears as a member of the Justice League towards the end of the third season of Young Justice (2010), voiced by David Kaye.