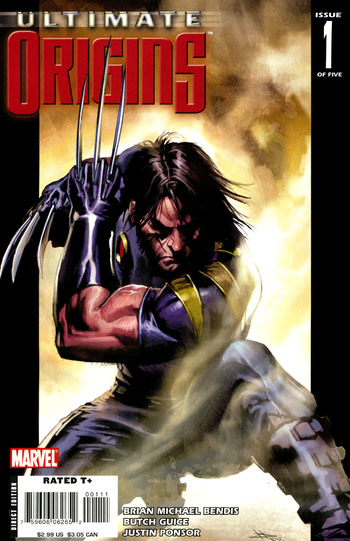 Everything starts here!
"What Ultimate Origin is going to do is sort of tell us how it all began. ... The Ultimate Universe isn't very old, so this isn't a cosmic story. You're not going to see the birth of a planet. What you'll see is how the superhero community was introduced into the human population. So you'll learn the importance of things like the Super Soldier program, which has been hinted at in Ultimate Spider-Man and Ultimates 1 and 2. Now, Brian is going to connect the dots."
— Jeph Loeb
Advertisement:

Ultimate Origins is a limited series by Brian Bendis and Butch Guice that tells the Meta Origin of Ultimate Marvel.

In the darkest hours of World War II, the American government seeks to create a supersoldier, to win their war against the Axis and their otherworldly allies. But their Project: Rebirth has so far had little to no success. Meanwhile, in the theatre of war, a pair of soldiers called Nick Fury and James Howlett are arrested for theft.

In the modern day, the Fantastic Four are called in to SHIELD's Project Pegasus, to examine a mysterious item that has been sitting in the vaults since World War II.

Secrets are about to come to light, dealing with Fury, and Howlett, the origins of Captain America, Magneto, and mutantkind as a whole. But what is the connection?