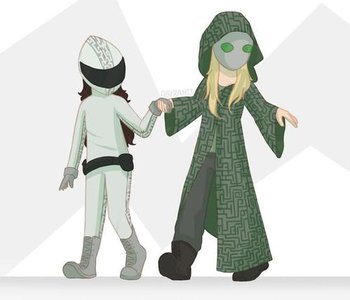 Taylor "Ariadne" and Elle "Labyrinth"
Art by Abyranss
Part of me wanted to scream that it had been both of us, that Madison and I had both told the truth and that I never wanted to see her psychotic face again. But I didn't. Not because I actually wanted to be friends with Sophia, but because I didn't want her to know just how much I despised her, and myself. I didn't want her to know that until I found some way of getting Taylor the justice that she deserved, the justice that the PRT and the authorities had refused to deliver.
Advertisement:

Intrepid is an Alternate Universe Worm fanfic by Cerulean.

In an Alternate Universe of Worm, the locker prank ends with Taylor in a vegetative state. This event ends up with the terrible trio splitting apart and ending up in different schools. Unbeknownst to one another, Taylor, Madison, and Emma end up triggering as well and each sets out on a different path, with Emma (Redshift) joining the Undersiders, Madison (Archive) becoming an Independent hero, and Taylor (Ariadne) joining Faultline's crew.

The story can be read in SpaceBattles

so readers can keep track of everything.

Cerulean has also written another Worm fic with a similar theme: Atonement and there is a spin-off for Vista planned called Odyssey.

open/close all folders
A-C
D-F
G-I
Advertisement:
J-L
M-O
P-R
S-U
V-Z
My parents had been horrified, of course, though neither of them really said much about it. My father gave me the money to get my hair fixed into the pixie cut that it was now, and my mother said that my emotion was 'understandable'. Still, I heard them talking to each other when they thought I couldn't hear them, and I knew that they thought there was something terribly wrong with me.
If only they knew what kind of girl I was, what kind of evil I'd done. If only I could tell make them understand.