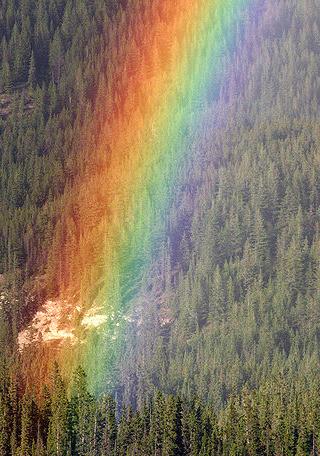 "Someday we'll find it, the rainbow connection,
The lovers, the dreamers and me."
— Kermit The Frog, The Muppet Movie
Advertisement:

Rainbows in stories are not just symbolic, but also prone to traits that actual rainbows never exhibit, the most common being solidity, treating the rainbow as an object that can be interacted with.

Because rainbows seem to travel from the ground to the sky (and back, if complete), they are usually seen in mythology as some kind of bridge or other connection point to and from heaven; in Norse Mythology the rainbow is Bifröst, the bridge to Ásgarðr; in Greek Mythology, Iris is the goddess of the rainbow as well as the messenger of the gods (Which makes this Older Than Feudalism). In Ireland, a rainbow's base is also a great place to keep a pot of gold (in fact, it serves as a perfect hiding place, since it's impossible to reach). In The Bible, the rainbow is a pledge that the world will never again be flooded to destroy all living things. Meanwhile in Japan, a rainbow is traditionally an ill omen, of doom or at least bad weather, though the Western perspective has become more widespread there.

Some people even associate rainbows with ULTIMATE POWER, of all things.

Since rainbows are natural phenomena of great power, it's also reasonable to give them to actual characters and forces within a story. Expect some of the flashier Anime characters to use them directly as a weapon or to incorporate them somehow into Ki Manipulation. They're also a common symbol in worlds known for their Elemental Rock–Paper–Scissors, as a representation of a character's equal dedication to each element. Finally, they are known in some circles to be extremely girly and are often a symbol of Camp Gayness.

May overlap, especially in the second variant, with All Your Colors Combined. See also Rainbow Motif, Rainbows and Unicorns, and Ride the Rainbow. If a rainbow is drawn with fewer than seven stripes, that's Rainbow Lite.

Examples of natural Rainbows as objects

Examples of Rainbows used by characters

Examples of Rainbows as symbols

Laughin' Jokin' Numbnuts is the final level of the game and is the epicenter of LJN in Game Land, a rainbow realm of death and misery.

Laughin' Jokin' Numbnuts is the final level of the game and is the epicenter of LJN in Game Land, a rainbow realm of death and misery.