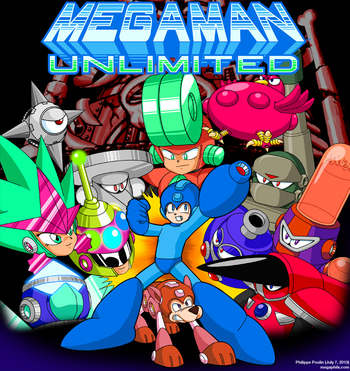 If you didn't know it was a fan game, you'd think it was Capcom's.
Advertisement:

A fan-made Mega Man (Classic) game built by a team put together by Philippe Poulin (aka MegaPhilX). The game was released on July 14, 2013. It has been programmed inside the Mega Man Engine which was designed around Multimedia Fusion 2. The project started out as a simple Flash project, it eventually became a real game, which is being created with a C++ programmed gameplay engine. As with Mega Man 10, it, too, uses an 8-bit art style that's meant to imitate the style of the NES/Famicom games. Unlike 10, however, only Mega Man is playable, and he can use the slide. In later versions, a charge shot is also available.

for the game, where all the latest updates are being posted.

In the year 20XX, the world comes under attack by Dr. Wily's latest Robot Masters, but he claims that they went out of his control. Upon hearing his plight, Dr. Light accepts his assistance. Both scientists discover that an unknown force is controlling them. However, Mega Man suddenly gets attacked by a mysterious robot, which kidnaps Dr. Wily afterwards. As such, Mega Man sets out to stop the Robot Masters' rampage, rescue Dr. Wily, and take on the enigmatic robot responsible for these misdeeds.