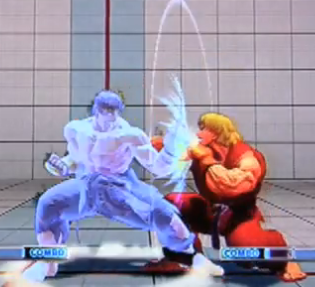 Everyone knows That One Boss is so hard (among many other reasons) because he's only vulnerable for five seconds out of every sixty. Won't he be pleasantly surprised when he realizes the Player Character has learned to do this too!

There are two kinds of Invulnerable Attack; the first happens in games that have a Charged Attack mechanic, and while it's charging the player is invulnerable to enemy attacks (though he might still suffer knockback). The second is when the charged attack executes, so while the overly long CGI plays out the player can take a nuke to the face without flinching. The charge part or attack part might make the performer lose their collision hitbox/hurtbox while they're covered in active hitboxes (i.e those that hit things).

The aversion is pretty common though, that being hit during the charge up or execution to the attack does cause damage and may even interrupt it altogether. Usually it's far, far more common for a charged attack to leave you motionless and vulnerable - this is usually an intentional counterbalance to charge up attacks being more powerful.

A savvy player can use this to "block" otherwise unblockable and unavoidable area attacks. Even if the boss is also immune to the charged attack during his own "unavoidable attack", the player can save a boatload of health. Similarly, part of beating most bosses involved players learning to dodge or avoid the parts of their attack pattern where they're invulnerable.