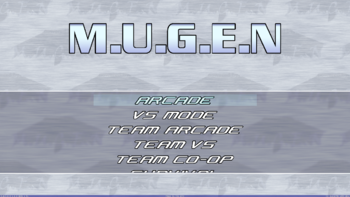 It's so simple, yet so complex. It's the perfect Fighting Game formula! HUEHEHEHEHEHEHE! Click here to see the previous official Winmugen menu 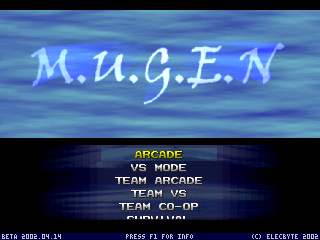 "Victory means nothing when we're fighting everything."
—Mondegreen of Loading screen in the "Infinity Mugen Tournament" motif.
Advertisement:

"Mugen" is Japanese for "infinity". M.U.G.E.N, however, is a freeware 2D Fighting Game engine designed by Elecbyte, written in C with the Allegro library and originally released in July 1999. Beta versions of the engine were made to work on DOS, Linux, and Windows platforms, all of which were distributed through their website.

At its core, the M.U.G.E.N engine allows users to import created characters, background stages, and other game objects through interpreted text files, graphics, and sound compilations to create a functional fighting game similar to commercial games produced by Capcom or SNK. While the engine is set up primarily for fighting game development, developers have used it for several other game types (including shooter and platform style games). Elecbyte officially claims to have forgotten what the acronym M.U.G.E.N stood for, but the readme documentation says its meaning referred to the days when the engine was meant to emulate shooting games instead of fighting games.

The engine allows anyone with the resources to create and import characters, background stages and other game objects. It even supports various types of audio formats (mainly MP3 and MIDI, although it can be configured to play various audio formats via Winamp plugins) so that players can have a soundtrack. Since M.U.G.E.N allows for most of the same types of functionality found in most commercial 2D fighting games, players can basically recreate any of those games' characters and gameplay—which is where the real appeal of the engine lies.

A vast majority of the first wave of M.U.G.E.N sites have either not been updated since 2010 or have been shut down. Because of this, finding certain characters that have become infamous within the M.U.G.E.N community is a near-impossibility without the use of "warehouse sites", which try to contain as many characters as possible.

First released on the 17th of July 1999, M.U.G.E.N was initially created for MS-DOS. Development of the DOS version ceased when Elecbyte switched to the Linux platform in November 2001. For a time, Elecbyte had a running request for donations on their site to legally obtain a Windows compiler so they could make a Windows version of M.U.G.E.N. The development group discontinued this project in 2003 and shut down their site. Speculation has since pointed at leaks made public of a private Windows-based M.U.G.E.N beta that was provided to donators.

The private WinM.U.G.E.N beta contained a two-character roster limit, locked game modes, and nag screens. With the beta leaked and Elecbyte gone, a "no limit" hack that removed most of these limitations was made available in 2004 by Rou Hei, followed by subsequent updates to deal with bugs and other issues. This version of M.U.G.E.N is functionally the same as the last Linux release, though with subtle differences and unique issues (mostly revolving around proper music and music plugin support). Due to the changes between the DOS and Linux versions of M.U.G.E.N, many older characters required at least the SFF files to be modified so the engine could display palettes correctly (notably on portraits). This version also had some changes in how certain CNS script controllers functioned, which caused some minor upset amongst the community. Those that could still run the DOS version in some form stayed with that version and even offered DOS patches to downgrade characters for compatibility with the older version.

In May 2007, a hacked version of WinM.U.G.E.N was released by a third party; this hack added support for high-resolution stages (such as those seen in Guilty Gear X) at the cost of losing support for standard resolution M.U.G.E.N stages. Later that month, another hack was done to add support for high-res select screens. In July 2007, another hack—this one created by Sion and Kung Fu Man, based on the last high-res hack—allowed for only the select screen to be high-res, not the stages. In December 2007, a hack from an anonymous source allowed both low-res and hi-res stages in the same build, with only a single line of code necessary for the hi-res stage support.

Elecbyte's website and the return of the M.U.G.E.N engine

In mid-2007, Elecbyte's site returned, though not without some controversy as to its legitimacy, as it only showed a single logo with Google ads on the side. On the 26th of July, a FAQ was added to the site, which claimed that Elecbyte would release a fixed version of WinM.U.G.E.N before major format changes in the next version. Those formatting changes would supposedly remove compatibility in regards to older works: "Do not expect old characters to work. At all."

Despite some widespread agreement in the M.U.G.E.N community that the new site was a fake, things changed around two years later when a new release candidate, MUGEN 1.0, was added to the site. The 1.0 version offered Open GL support as well as proper HD display options, victory quotes, and improved stability as a whole. The supposed widespread incompatibility of older works was never a problem; Elecbyte took steps to ensure that properly-coded characters would not malfunction in the new engine (or would require minimal updates), though screenpacks were not necessarily subject to the same rule. MUGEN 1.0 left the "Release Candidate" stage in January 2011; MUGEN 1.1 was eventually released in August 2013. There have been no updates to the engine since then.

When development of the WinM.U.G.E.N engine stopped, several clone projects started to try duplicating the engine's functionality from scratch. These projects include ShugenDo, InfinityCat, xnaMugen, and Open Source Mugen. Some of these alternatives presented online gameplay capabilities, a feature many users wanted for years. M.U.G.E.N clones currently in development include IKEMEN

For more information, check out these websites:

For the sake of keeping this article from becoming another list of character tropes, please avoid adding entries for characters which are not exclusive to M.U.G.E.N, as tropes associated with pre-existing characters from other media can have theirs listed in the appropriate areas.

M.U.G.E.N-based games with their own pages:

The M.U.G.E.N engine, its community, and even some games made with the engine include the following tropes: