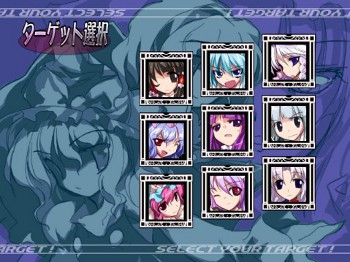 Marisa and Alice have a tough fight ahead.
Advertisement:

Mega Mari is a sidescrolling Platformer/Bullet Hell game created in the vein of Mega Man and Touhou Project. Uses many elements from both series, including having eight "robot masters" as most Mega Man games do, and then the final castle stages where Wily Patchouli awaits, as well as the gameplay being quite similar to Mega Man games. The enemies focus largely on bullet patterns, with single enemies shooting anywhere from a single bullet to 12+ bullets at a time. The results when many enemies are on the screen can be quite overwhelming.

The plot doesn't quite involve world domination here, it's pretty much Patchouli getting annoyed with Marisa and Alice "borrowing" books out of her library and not bringing them back, so she transforms her library into a castle and has multiple characters who have something against Marisa try to stop her and Alice from breaking into it.

The main characters handle relatively the same as far as jumping and running speed go, but the pair both use different weapons. Marisa's standard shot behaves the same as Mega Man's Mega Buster prior to it receiving the ability to charge in Mega Man 4, while Alice uses a laser beam that pierces shields, such as the Prismriver's instruments, and hits more rapidly the closer to the enemy you are. On the down side, it's only about half as strong as Marisa's weapon.

Like in Mega Man Xtreme 2's Extreme Mode, here you have to decide which of the two characters gets the weapon the boss drops, while the other character gets nothing. Both characters also have an extra weapon/item, Marisa's broom, which behaves similarly to Item 2 from Mega Man 2, being given after earning four boss weapons, and Alice's Shanghai Doll which is given if she receives four boss weapons and behaves similar to Beat from Mega Man 5 and 6, following onscreen enemies and rapid fire shooting at them.