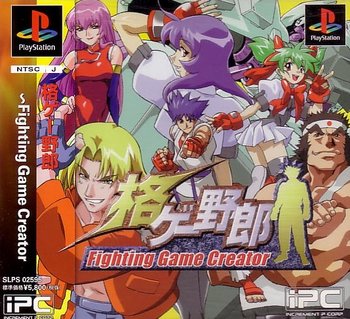 Kakuge Yaro: Fighting Game Creator is a PlayStation-only Fighting Game made in The '90s by IPC Software released only in Japan. The game was composed by 7 characters: a karateka, an Anime Chinese Girl, an Eagleland American, two High School girls, a construction worker and a robot. Some of the plus of this game are the beautifully drawn sprites and portraits, the colorful stages (with an unexpected cameo) and the possibility of create your own version of the character, selecting the moves you want to make your character unique, predating 3D fighting games by many years. Sadly, the game has a poor gameplay, few characters to defeat and in general had nothing to do against giants as Capcom and SNK game franchises as well various other independent fighting games for PlayStation that overpassed Kakuge Yaro so far.

Although the game went into obscurity at the point no one knew about it even on Japan, Kakuge Yaro gained a revitalized new fame in the Turn of the Millennium thanks to M.U.G.E.N, whose creators (especially from Mugen Guild and MRev forum communities) took the sprites and remade characters to their own way to create a new standard for the characters of that time, becoming a fad in the 2000s. Also the stages, lifebars and screenpack had been recreated for this game engine, and even closed fullgames had been made, like Project Lensman.

Even though the game itself is hardly to find by standard ways, Emulation is another way to get it, even having an English patch that improves the experience of the game for non-Japanese players. Or, you can download characters, stages and screenpack for M.U.G.E.N and recreate it there.