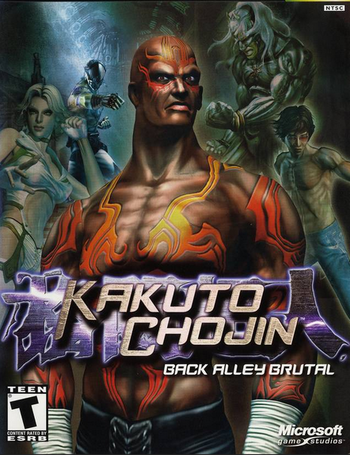 Kakuto Chojin: Back Alley Brutal AKA Kakutou Choujin: Fighting Super Heroes is a Fighting Game exclusively made for Microsoft's Xbox gaming console published in 2002 by Microsoft Game Studios. While used as an early demo game for the Xbox's graphical capabilities, it is more notorious for being pulled off of the shelves shortly after a prayer from the Quran was used as a sample in one of the music tracks.
Advertisement:

There are 13 fighters in this game: Asad, Vittoria, Sabre, J.D. Stone, Rena, Kahn, Crusher Ramirez, Shadow, Roxy, Reiji, Vegard, Yin Kai Li, and Daeva. They are assembled for a fighting tournament named the Fist of Fire Tournament, sponsored by an evil organization called the Maladinia.