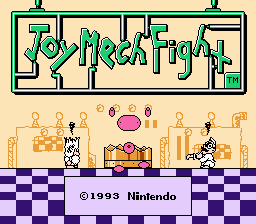 Joy Mech Fight is a Fighting Game that Nintendo developed for the Famicom, with No Export from Japan, in 1993. It pushes the limitations of the 8-bit console by making all the characters have their body parts float separately, which makes for smooth animations with low memory costs. Surprisingly for a Famicom Fighting Game, the controls work well, and there are even tutorials on each character's moveset.

The plot of the game tells of Dr. Little Emon, who created robots with the help of his best friend, Dr. Ivan Walnut. One day Dr. Emon finds the laboratory destroyed and the seven robots that were being worked on are nowhere to be seen. Turns out Dr. Walnut is behind it all, intent on conquering the world. Betrayed, Dr. Emon calls his eighth robot, the comedian Sukapon, to be reprogrammed into a battle robot to put an end to Dr. Walnut's plans.

Now why does that sound familiar?

While the game remains largely ignored by Nintendo overseas outside of cameos in the Super Smash Bros. series, you can check out its Spiritual Successor Uchu Mega Fight for more cartoony floating limb fighting.