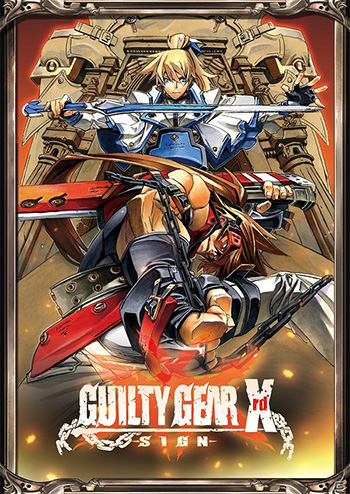 Buckle up. It's time to Rock.
Mankind knew that they cannot change society.
So instead of reflecting on themselves, they blamed the Beasts.
Heaven or Hell?
Let's Rock!
— Match Intro, Guilty Gear Strive Demo

Guilty Gear is a power of rock Fighting Game series created by Arc System Works. The franchise started out as a cult classic, but got noticeably better attention when its sequels were released.

In the year 2010, mankind discovered an incredible energy source that defied all known laws of physics. This unlimited power would be fittingly labelled as "magic" and go on to catalyse the growth of civilisation across the world. However, this miraculous discovery was not enough to quell the flames of war within the human soul, and soon the invention of Magitek was used to create powerful Living Weapons known as "Gears."

The Gears eventually Turned Against Their Masters in a century-long conflict known as The Crusades. Led by the righteous Holy Order, mankind eventually defeated the leader of the Gears and sealed her away in a dimensional rift, causing every other active Gear to fall dormant.

As the first game opens, the year is 2180, and there are whispers that the Gears may be revived and resume their genocide of humanity. In the midst of the ensuing turmoil, two opposing rivals clash swords: Sol Badguy, an amoral Bounty Hunter with a dark secret linking him to the Gears; and Ky Kiske, an idealistic young paladin of the Second Holy Order.

Mechanically, Guilty Gear has a few unique concepts that set it apart from the competition:

The series' release history is pretty long, as it's been around for a good two decades and counting:

Main games note The Midnight Carnival and Accent Core Plus R were ported to Steam much later in life and they were all found in arcades, aside from, curiously, the original Guilty Gear.

After a very long hiatusnote because Overture was such a different beast compared to the other games, the last major release was in 2006 with Accent Core, and even that was still based heavily on XX and used lots of 2002 assets), the franchise returned with Guilty Gear Xrd -SIGN-note pronounced "ig-zird", released in arcades (using Sega's RingEdge 2 board) on February 20, 2014, with the home release on December 16th, 2014 in North America. The game takes place one year after the events of Guilty Gear 2: Overture (in the year 2187) and marks a return to the series' 2D-fighting roots. In addition to Xrd, Arc also unveiled Guilty Gear Vastedge XT

note Vastedge was thought to be Vestige by some, but Arc themselves later confirmed the correct spelling

, a pachinko game also set after Overture that appears to tie into Xrd.

and the arcade intro

for Xrd to their official YouTube page, and previews for Vastedge can be found here,

A new Guilty Gear game, entitled "Guilty Gear Strive", was announced for a 2020 release with a preview trailer

at the 2019 Evo Championship Series and confirmed for release on PlayStation 4, PlayStation 5 and Steam. Ky and Sol were confirmed by the initial trailer along with a new character named Nagoriyuki who wields two large katanas. Notable changes include a new corner system where characters can "break through" the corner and smash their opponents into a stage transition, changing how corner mechanics work for the first time in the series.

Despite the fact that many installments contain the letter X, this is not that type of game. (Unless you're playing a Rule 34 doujin.)

The Guilty Gear series is well-known for its Instant Kill techniques. In the first game, successfully executing an Instant Kill wins not just the round, but the match outright.

The Guilty Gear series is well-known for its Instant Kill techniques. In the first game, successfully executing an Instant Kill wins not just the round, but the match outright.