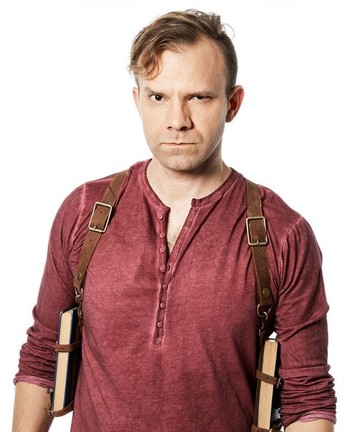 (978): His voice is like sex for ears... Which sounds so wrong, but so right at the same time.
—Lightning, Texts from FFXIII

(as noted by Ali Hillis)
Advertisement:

Liam O'Brien (born May 28, 1976 in Weehawken, New Jersey) is an American voice actor. Chances are that if you notice a character who seems aristocratic or have noble standing, they'll have this guy voicing them. Most likely characteristics of his voice are an almost-faux British accent, gruff, or a very laid-back demeanor. And he doesn't differentiate that much—

His real forte seems to be voicing characters who have more than a few screws loose in their head, from the eccentric to the completely insane. In fact, this is what shot him to fame when he voiced Gaara in Naruto. He has a knack for Ambiguously Gay characters, and one heck of an Evil Laugh that's present in just about every villain he's ever played.

He's married to fellow voice actress Amy Kincaid (who played Shirley Fenette in Code Geass and Kotone Himekawa in To Heart) with two kids, and also does a butt-load of ADR directing (most notably for the Resident Evil series).

and started a podcast, "Allworknoplay

", with fellow voice actor Sam Riegel. He is one of the nerdy-ass voice actors starring weekly in the Dungeons & Dragons campaign Critical Role.

"Ha! Did you see that, Shinji!?"
Feedback