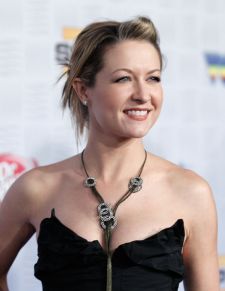 Alecia Deann "Ali" Hillis (born December 29, 1978 in Huntington Beach, California) is an actress, both film and voice, currently residing in Los Angeles County, California. She had several roles in some TV series like Felicity and Baywatch as well as some lesser known direct-to-DVD films.

Although having done some voiceover work before, her first truly significant voice acting role was as Liara T'Soni in Mass Effect in 2007. However, her big break would come in the early 2010s when she became the voice of Lightning for Final Fantasy XIII, Ariel Hanson in Starcraft II, Palutena in Kid Icarus: Uprising (and a series of shorts to promote Uprising), and reprised her role as Liara in Mass Effect 2 and its critically acclaimed DLC "Lair of the Shadow Broker".

Since then, she has exploded in popularity as a video game voice actor. In a June 2011

interview, she disclosed that at the time she was recording over ten new voiceovers for multiple series note This is mentioned at around the 30 minute mark of the interview in the given link. This is one rapidly rising star in the voice acting industry.

In comparison to her prominent video game voice acting profile, her anime voiceover roles are much more limited. To date, they consist of only Emma Frost in the X-Men anime and Karin in Naruto Shippuden.

"This is ridiculous... Worst description ever."