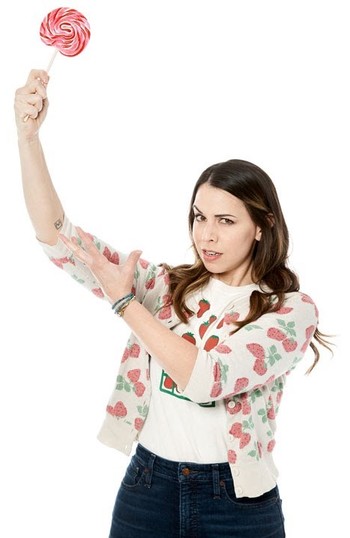 The Mother of Critters and her Spiritual Weapon
Advertisement:

Laura Dawn Bailey (born May 28, 1981) is an American actress and voice actress born in Biloxi, Mississippi. Best known for her anime roles (at first, Funimation titles but she has definitely moved on), she has also supplied voices in video games and worked as staff on several anime series. If you've played many AAA games in the last few years, you've likely heard her voice, as she's become one of the most prolific female voice actors in the industry since 2010.

Some of her best known anime roles are Lust in Fullmetal Alchemist, Young Trunks in Dragon Ball Z, Maka Albarn in Soul Eater, Tohru Honda in Fruits Basket, Sana Kurata in Kodocha, and Shin Nohara in the Funimation English dub of Crayon Shin-chan.

As for video games, she is well known as the English voice of Chun-Li, from Street Fighter IV to Street Fighter V, Rise Kujikawa in Persona 4, Rayne in the BloodRayne video game series, the default voice for a female Boss in the Saints Row series from 3 onwards, Fetch in inFAMOUS: Second Son and inFAMOUS: First Light, Serana in the Dawnguard DLC for The Elder Scrolls V: Skyrim, Fiona in Tales from the Borderlands, Kait Diaz in Gears of War 4 and 5, and Black Widow in Marvel's Disney XD animation lineup.

Due to becoming a union actress, Bailey primarily does video game voice overs and western animation nowadays, rarely getting any new anime roles, generally only reprising roles when she does anime. If she does get a new anime role, it's usually with Studiopolis. She is married to fellow voice actor Travis Willingham, and they have one son, Ronin.

I challenge these tropes!

"I'm the strongest voice actress in the world!"
Feedback

Example of:
Did You Just Punch Out Cthulhu?