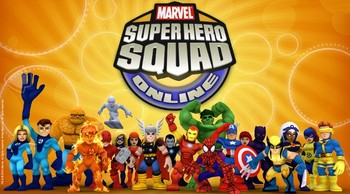 Marvel's Super Hero Squad Online (2011) was a free, kid-friendly Massively Multiplayer Online Role-Playing Game somewhat based on The Super Hero Squad Show. Like the show, it features chibified versions of the heroes, villains and anti-heroes of the Marvel Universe, before it was shut down on January 11th, 2017.
Advertisement:

Players buy Marvel heroes to add to their "squad" and use them to go on missions to fight villains, play a special collectible card game with other players, or hang out at their helicarrier HQ. An upgraded account called "Jr. SHIELD Agent" allows players to get more money and allows access to certain heroes that are unavailable to normal accounts. New heroes, accessories, missions, and card booster packs are added frequently, and include almost every character in Marvel's history, from classic staples such as Iron Man, Spider-Man, and Wolverine, to rather obscure ones like The Sentry, Valkyrie, and American Dream (Captain America's Distaff Counterpart from the MC2 continuity).

As marketing for the Avengers movie, playable versions of the movie heroes are available, as well as the movie version of Loki as a mission boss. There were also missions and updates (including new characters and skins) based on Thor: The Dark World, Captain America: The Winter Soldier and Guardians of the Galaxy.

Originally the characters didn't speak, but a later update gave them all voices. Many of the voice actors from the show returned.