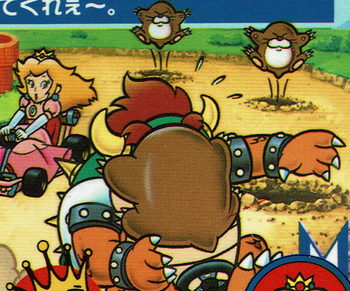 No doctor can fix that facial mole.
"Watch out for the sneaky Monty Moles that are common to this area. They're dirty fighters. They pop up from underground and chuck rocks at people. The cowards!"
— Goombario, Paper Mario 64
Advertisement:

Whenever that hole in the floor isn't the home of a Bottomless Pits, it's the home of a monster. And when there's a lot of holes in the floor, you're probably in the company of this type of Mook. Emphasis on fighting these guys is on speed and timing, as you only have so long before they throw something at you and scurry back into hiding. Thankfully, if it isn't a boss these monsters die quickly. May overlap with Puzzle Boss. Non-boss forms can quickly cross into the realm of the Goddamned Bats.

Compare Ambushing Enemy. Related to the Mole Monster, who otherwise functions differently by actually homing in on the player from underground.