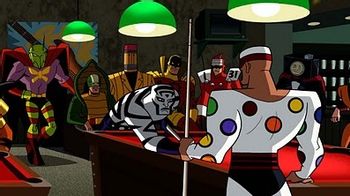 Spots versus stripes, geddit?
"Ya got trouble
Right here in River City!
With a capital 'T'
And that rhymes with 'P'
And that stands for Pool!'"
— "Ya Got Trouble,"

Billiards. At face value, not the most intimidating game. Despite accusations that the cueball is "possessed," "cursed," or "hates me personally," pool typically isn't what comes to mind when you say "things a bad guy would enjoy." In fact, its image has softened by now to be considered a respectable game of skill for any age, and even used in kid's Edutainment Shows like Beakman's World to illustrate rebound trajectories.

Unless, of course, you're in the movies, where if you see someone playing pool, there's a 90% chance they're planning some dastardly deed at the same time (otherwise they are just having fun). Whether it's due to negative connotations regarding the term "pool shark" (not to be confused with a Shark Pool), or possibly due to the fact that pool is associated with illegal betting rings (which also serves as a convenient motive for a cash-starved antagonist to do any feats of nastiness the story requires), the image of a group of Big Bads and thuggish Mooks shooting eight-ball seems to be engraved in the minds of filmmakers, though in these scenes, theses villains tend to be Man of Wealth and Taste varieties, due to the game's association with The Mafia or any other criminal organizations. The heroes, especially an Anti-Hero, may also play pool, to emphasize how cool, dangerous, and outside the norm they are, or just taking a challenge on it.

For the Femme Fatale and The Vamp, it's also a free excuse to get them to bend and sway in a variety of manners, showing off their body and especially their legs, and it gives them three ways to end the scene: keep on flirting and end on sexy; humiliate the mooks by beating them at their own game; or just start a Bar Brawl.

Part of the origin of this trope is in pool halls having been The New Rock & Roll once upon a time, like bowling and pinball before them and video arcades afterwards. Its continuing popularity now is likely due to a pool table's ability to fit nicely inside a Bad-Guy Bar or a family-friendly Den of Iniquity. Additionally, if the work is one where depicting alcohol is verboten, a pool hall is a way to portray the same kind of ambience as a dive bar without any actual drinking or the use of Frothy Mugs of Water. If a Fight Scene ensues, as it inevitably will, expect the cues to be used as clubs, swords, or broken in half and used to stab people, not to mention the balls themselves are really effective to throw at (and kill!) people.

Overlaps with Hustling the Mark, if we see either the hustler or his particular marks as "bad guys." Expect scenes in such places to be opened with a Cue the Billiard Shot.