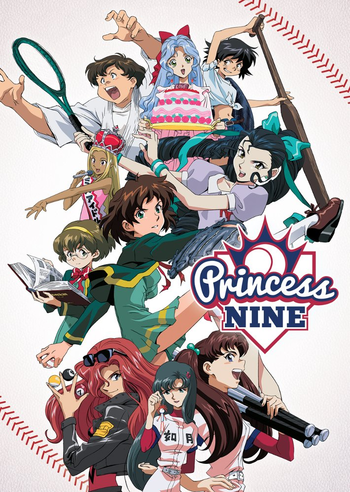 A baseball team of high school girls attempts to make it to the national tournament. The National Boys Tournament.

Also known as Princess Nine Kisaragi Girls High Baseball Club, Princess Nine is a 26-episode television anime series first aired on NHK-BS2note The public broadcaster's expanded-tier satellite service in 1998. It was dubbed by ADV Films from 2001 to 2002 and is currently licensed in North America by Lucky Penny Entertainment. Crunchyroll

has its available for streaming.

Keiko Himuro, president of Kisaragi Girls High School (and its brother school for boys), has a dream. She wants to prove that girls can compete in baseball (not merely softball), and forms a team around Ryo Hayakawa, a brilliant young pitcher. A Ragtag Bunch of Misfits is quickly assembled. They must then overcome sexism, personal problems and oh yeah, an Opposing Sports Team or two on their way to respect and baseball victory.

A Character Page has been started. Contributions would be nice.