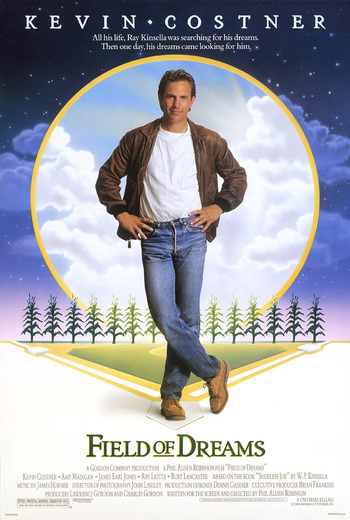 Adapted from the 1982 novel Shoeless Joe by W.P. Kinsella, the film is built on a unique story idea about an Iowa farmer who feels compelled to build an expensive baseball field.

Ray Kinsella (Costner) is an honest farmer with a nice family, but explains in the prologue that he and his father, who was a baseball fanatic, had a falling-out and were unable to reconcile before the latter's death. One night, Ray is out in his cornfield when he hears a disembodied voice whisper "If you build it, he will come." Surprised, he is later given a vision that what he is supposed to build is a baseball field, and that the famously disgraced (and long-deceased) "Shoeless" Joe Jackson will return from the dead to play baseball there. For obvious reasons, Ray is left wondering how he could ever get such a bizarre idea. But after a long talk with his wife Annie (Madigan), Ray decides that he wants to do something outrageous because it feels right and not be afraid of what others might think.

With the farm barely making a profit to begin with, the cost of building the baseball field and the loss of the farmland it occupies puts the Kinsellas in financial trouble. But after a few months, Shoeless Joe (Liotta) does appear, bewildered himself but with an honest desire to play some baseball. Eventually more dead baseball players from Jackson's era return to play. Unfortunately, Ray and his family are the only ones who see the players and the bank is looking down on them.

Eventually Ray receives another insight ("Ease his pain") and comes to believe that this means he has to track down aging author Terence Mann (Jones) and take him to a baseball game. Even he doesn't have a clue why, but decides to continue acting on these strange impressions.

Field of Dreams has a very strange concept, but what it carries is an underlying metaphor of faith and redemption. It is one of Costner's most well-known films and also one of James Earl Jones' most famous roles outside of voicing Darth Vader and Mufasa.

It was nominated for several Academy Awards, including Best Picture and Best Adapted Screenplay.

Build tropes and they will come: