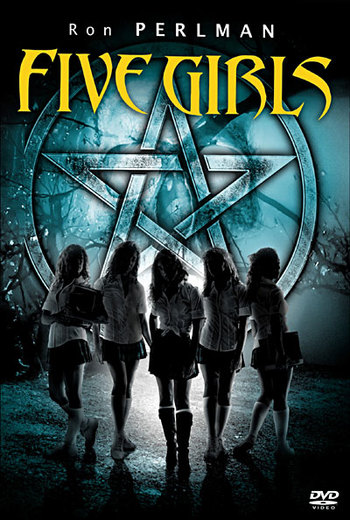 5ive Girls is a 2006 Canadian horror film starring Ron Perlman, Jennifer Miller and Jordan Madley, written and directed by Warren P. Sonoda. Produced on a budget of $3,000,000, it has a runtime of 95 minutes.

In St. Mark’s Catholic boarding school for girls, the religious student Elizabeth is attacked by evil forces and disappears from the classroom and the impotent Father Drake is incapable of saving her. The school is closed and five years later it is reopened. Five troubled unwanted girls - Alex, Mara, the blind Cecilia, Leah and Connie - are left by their family in the institution, severely directed by the headmistress Miss Pearce with hands of iron. Father Drake is their teacher and the girls are forbidden to go to the mysterious third floor. When Alex has visions of the possessed Elizabeth, weird things happen in the spot and the girls have to fight against a legion of two thousand demons.