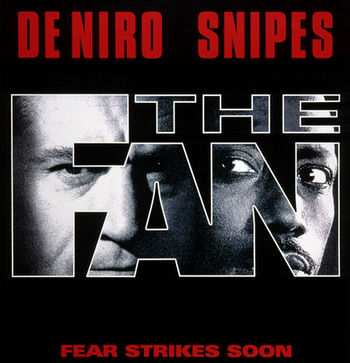 The Fan is a 1996 sports drama/thriller directed by Tony Scott and starring Robert De Niro and Wesley Snipes.

Gil Renard (De Niro) is a down-on-his-luck, divorced knife salesman who worships his hometown San Francisco Giants, especially their latest acquisition, talented, yet arrogant and self-centered local hero Bobby Rayburn (Snipes). As the film progresses, Gil finds himself neglecting his responsibilities to his young son, his job, and ultimately his slipping sanity as he strives to get closer to Bobby. And it becomes apparent that Gil is willing to do anything for his baseball hero, only for him to be bitterly disappointed when Bobby's true attitude toward his fans is revealed.

Despite the presence of a big-name director, and two proven box-office draws in De Niro and Snipes, the film was a critical and commercial disappointment, with fans and critics either loving or hating De Niro's performance as Gil Renard, whom many felt drew inspiration from Michael Douglas' character in Falling Down and De Niro's much better-received role as a similarly unstable fan in The King of Comedy.