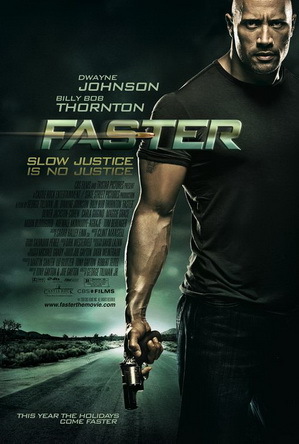 Faster is a 2010 movie starring Dwayne "The Rock" Johnson and Billy Bob Thornton. Johnson plays "Driver", a getaway driver just released after ten years in prison, who immediately goes on a Roaring Rampage of Revenge against the gang of thugs who killed his gang (including his older brother) and stole their bank heist money. Thornton plays "Cop", a burn-out junkie of a detective looking to close out his career on a high note by bringing Driver in. Thrown into the mix is "Killer" (Oliver Jackson-Cohen), a Blood Knight hit man looking to complete One Last Job before retiring to marry his girlfriend.

The film marked a return to the action movies that were Johnson's bread-and-butter before switching to more family-friendly fare.