Gotta Kill Them All 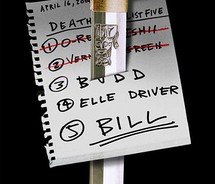 Gotta Catch Them All with a twist. The Plot Coupons or MacGuffins in question have to be found... and then destroyed. Perhaps they are Artifacts of Doom that menace the existence of the world as we know it, or maybe they are a group of Villains that just appeared and instead of ganging up and going against The Hero, they decide to spread and be evil elsewhere.

Many a Roaring Rampage of Revenge plot will involve the hero hunting down each bad guy on his hit-list in this fashion and slowly working his way up to the Big Bad behind it all for the final showdown. Or it may involve a villain hunting down another Big Bad and beating his minions, champions, and commanders, eventually leading to a showdown between the villain and the Big Bad in order to become an Ascended Demon.

Compare There Can Be Only One, Enemies List and Shoot Everything That Moves.

Often part of an Assassination Sidequest.